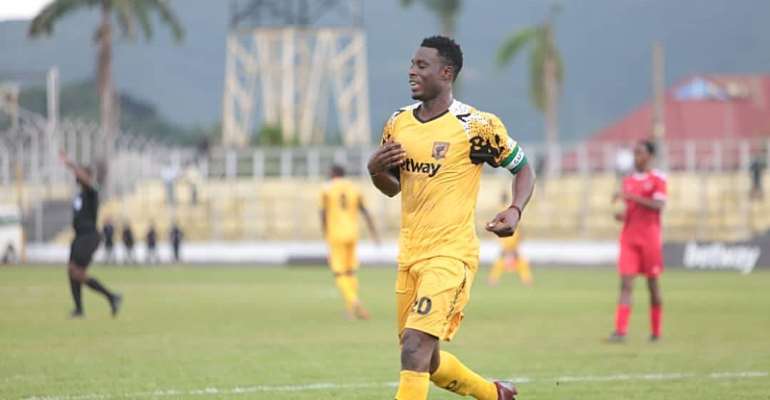 Captain for Obuasi Ashanti Gold, Shafiu Mumuni has revealed his desire to play for the Black Stars whiles citing that it will be a dream come true if he does get the opportunity to wear the national colour.

The prolific attacker has been leading the lines for the Miners in the past couple of seasons and continues to inspire the side whenever he steps onto the pitch with his teammates.

Last Saturday, he bagged a sensational hat-trick to help the Obuasi-based club post an emphatic 3-0 win over Equatorial Guinea giants Akonangui FC in the second leg of the preliminary round of the CAF Confederations Cup.

Following that jaw-dropping performance, several pundits have shared that it’s high time the striker was considered for national team duties.

Speaking in an interview with Fox FM on the back of his aspirations as far as playing for the Black Stars is concerned, Shafiu Mumuni has noted that it will be an honour to play for the senior national team.

“It will be an honour to be called. It’ll be a dream come true for me”.

“I’m praying to get that opportunity because it’s not just anyone that gets the chance to wear the Black Stars jersey”.

“I’ll be very happy if Coach Kwasi Appiah calls me,” he said.

Having helped Ashgold to secure qualification to the next round of the CAF Confederations Cup, they are now billed to face RS Berkane from Morocco in a double-header in September.