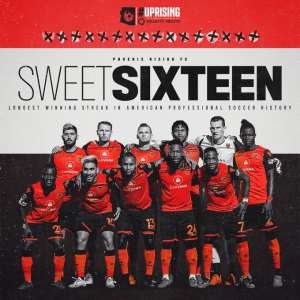 Ghanaian international Solomon Asante was on the score sheet for USL Championship side Phoenix Rising FC as they beat Tacoma Defiance 4-2 on Tuesday night.

The pacey attacker who is currently the captain for the side inspired the league leaders to their 16th consecutive victory, a record in the American professional soccer history.

In a match played at the Cheney Stadium, Phoenix took the lead just 2 minutes into the game courtesy a strike from Adam Jahn before Tacoma pulled level on the 26th minute through Hopeau Shandon.

The home side built on their lead and took a surprise lead on the 72nd minute when Bwana Handwalla found the back of the net.

Now on the losing side, Solomon Asante popped up on the 81st minute to score his 19th goal of the season to bring his side level. Two additional goals from Adam Jahn and Junior Flemmings late in the game sealed an emphatic 4-2 win for Phoenix Rising FC.

Solomon Asante was impressive throughout the game and continues to lead the goal king chart in the USL Championship.