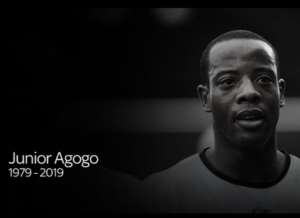 The once strong attacker has been suffering from a sickness that rendered him immobile in the past year and unfortunately lost his life at age 40 on Thursday whiles receiving treatment in England.

Premier League pair of Hearts and Kotoko have joined the millions around the world to mourn and pay tribute to the forward.

“Hearts of Oak is disheartened to learn about the passing of former Ghana striker Junior Agogo.

“The thoughts of everyone at the club are with Agogo’s family at this sad time.

Rest in peace, Junior”, the Phobians posted on the official Twitter page.

The Porcupine Warriors also posted, “We are saddened to learn of the death of former Black Stars striker, Junior Agogo. We extend our condolences to his family at this extremely difficult time”.

Junior Agogo impressed for the Black Stars during the 2008 Africa Cup of Nations (AFCON) tournament which was hosted in Ghana.

He has 3 AFCON goals to his name with the famous of them all coming against the Super Eagles of Nigeria.