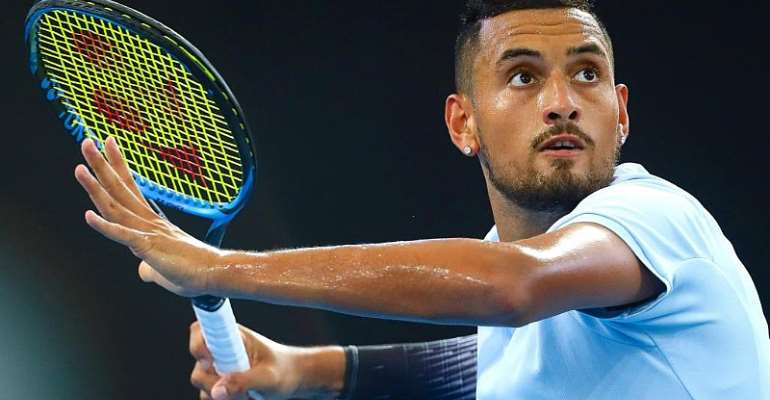 Controversial Australian tennis player Nick Kyrgios has been fined US$113,000 after an explosive Cincinnati Masters meltdown.

The world number 27 smashed two racquets, launched abuse at umpire Fergus Murphy and spat in the direction of the official.

The 24-year-old lost 6-7, 7-6, 6-2 to Russia's Karen Khachanov, but it was Kyrgios' behaviour which once again stole the limelight.

The ATP said the sanction included individual fines for ball abuse, leaving the court without permission, an audible obscenity and unsportsmanlike conduct.

"In addition to the on-site fines, the ATP is looking further into what happened during and immediately after the match to see if additional action is warranted,” said an ATP statement.

Kyrgios called the umpire a “tool”, screaming that Murphy was the “worst umpire, hands down”.

The pair also had a run-in at Queen's Club in June, where Kyrgios was handed a code violation after accusing a line judge of match-rigging.

The following month at Wimbledon, the Australian admitted to deliberately hitting a forehand directly at rival Rafael Nadal.

"Why would I apologise? I mean, the dude has got how many slams, how much money in the bank account?" said Kyrgios after his four-set defeat.

"I think he can take a ball to the chest, bro.”
In 2015, in one of his more notorious outbursts, Kyrgios was fined for making a sexual remark about the girlfriend of three-time grand slam winner Stan Wawrinka.

Kyrgios has been branded an embarrassment to Australian sport by the media in his home country.

Channel Nine sports presenter Tony Jones said he should be banned from the upcoming US Open.

“Yet again Nick Kyrgios has proved himself to be an embarrassment to Australian sport. Quite possibly world sport," he said on the broadcaster's website.

"Surely tennis authorities need to show something that resembles a backbone and deal with him accordingly.”

"Nick Kyrgios's behaviour in this match was, yet again, that of a jerk," Ings said.

"No umpire deserves to be treated as Nick Kyrgios treated Fergus. It was despicable behaviour rightly fined by ATP."