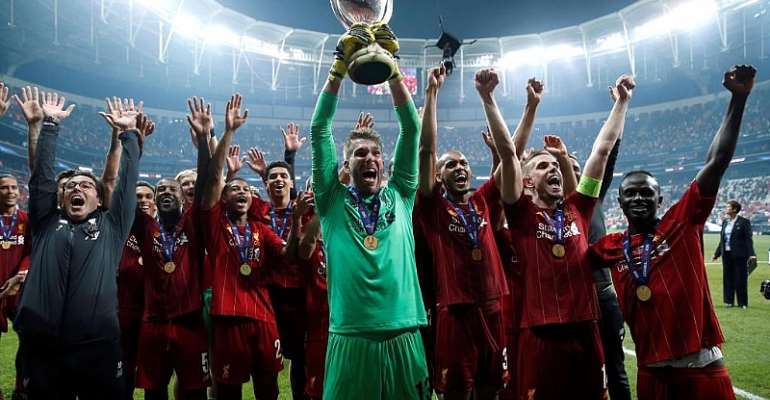 Stand-in goalkeeper Adrian was the unlikely hero as Liverpool beat Chelsea 5-4 on penalties to win the UEFA Super Cup in Istanbul.

The Spaniard saved Tammy Abraham's spot kick to win Liverpool their first trophy of the season after the match finished in a 2-2 draw on Wednesday night.

The new signing, who joined on a free transfer less than a fortnight ago, was only playing in the absence of the injured first choice keeper Allison Becker.

"Welcome to Liverpool! It's been a crazy week. I'm really happy for the team, I'm happy to play for Liverpool and happy for the fans," said a jubilant Adrian at full-time.

Liverpool manager Jurgen Klopp hailed the shot-stopper as “incredible”, admitting he had no idea where the goalkeeper even was a fortnight ago.

The 32-year-old was released by West Ham United this summer, with his last appearance coming in an FA Cup defeat to third-tier AFC Wimbledon in January.

"When I spoke to him for the first time it was clear he would need time to get fit, but we didn't have that time so he has to be fit now, and he was fit, he played an incredible game, he made sensational saves," Klopp said.

"In penalty shootouts you're always lucky but his performance over 120 minutes was incredible, making the save from the penalty was the icing on the cake."

Sadio Mane also played a key role for the Reds, cancelling out Olivier Giroud's first-half strike to ensure the match ended 1-1 after 90 minutes, before putting his team ahead in extra time.

Chelsea drew level when French referee Stephanie Frappart, the first woman to take charge of a major European men's match, gave a penalty after Abraham went down under contact from Adrian.

Jorginho converted the spot kick, but there would be no first trophy as Chelsea manager for Frank Lampard, who lost the Super Cup twice with the club as a player.

Praise for all-female referees
"To lose the game was disappointing but if it means Chelsea's season can be something like how we played today, we'll be ok," Lampard said.

"I am a new manager who's been here for six weeks or so, and what I saw today were things that I want in the team.”

Jurgen Klopp was vocal in his praise for the all-female refereeing team, even if he was not happy with the penalty awarded to Chelsea in extra time.

"I told the ref team that if we had played like they whistled we would have won 6-0, that was my opinion, that they played a brilliant game."

Both teams return to Premier League action this weekend, with Liverpool visiting Southampton on Saturday afternoon, while Chelsea host Leicester City on Sunday.