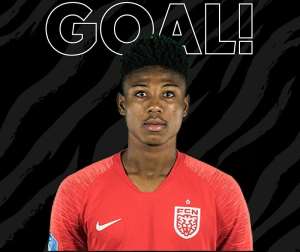 Ghanaian youngster, Francis Abu climbed off the bench to score an important goal for Danish top-flight side Nordsjaelland as they drew 2-2 against Silkeborg on Sunday to share the spoils.

The teenage sensation is highly rated and is expected to provide options for his new manager Flemming Pedersen in the ongoing season.

Abu, 18, was called upon in the second half when his side was trailing by two goals to nothing. Two good goals from Shkodran Maholli and Mads Kaalund meant Nordsjaelland was headed for a shocking home defeat until Mohammed Kudus reduced the deficit on the 52nd minute.

Francis Abu quickly showed his quality and made an instant impact when he was introduced by his manager to replace Mads Aaquist.

Having piled pressure on Silkeborg in the last 20 minutes of the match, Nordsjaelland finally found the back of the net on the 79th minute to make the scoreline 2-2.

Francis Abu latched onto a loose ball in the opponent’s area flowing a defensive error and fired home his first goal for the club which ended up earning an important point for his side at the end of the 90 minutes.

The former Right to Dream Academy has made a big statement and is likely to enjoy more minutes in subsequent matches.