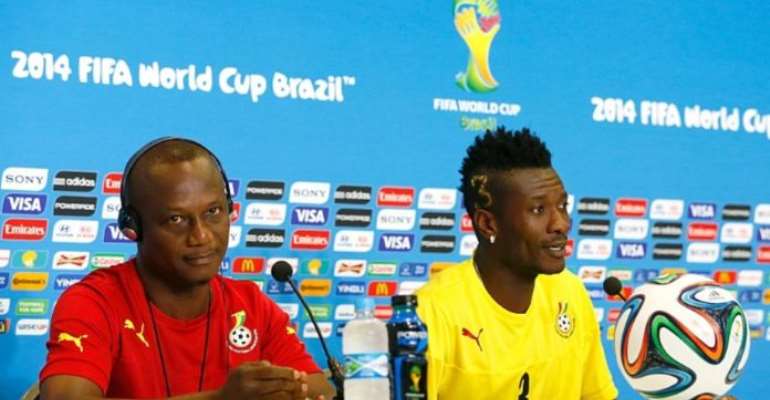 Ghana striker, Asamoah Gyan, says he was betrayed by Coach Kwasi Appiah following his decision to strip the Black Stars armband from him ahead of the 2019 Africa Cup of Nations.

With less than a month for the start of the 32nd edition of Africa's finest tournament, the former Sunderland forward was elevated to be the team's general captain losing the match-day role to Andre Ayew.

The decision by the coach influenced Gyan's decision to retire from the national team but after a presidential intervention, the former Liberty Professionals forward rescinded his decision.

Despite ironing out their differences with Coach Kwesi Appiah ahead of the tournament, Gyan says he was betrayed by the coach looking at how he has served the country and help the coach to become the first black coach to qualify the Black Stars to the World Cup.

"I felt betrayed and felt disappointed. I don't have a problem with him (coach). I won't lie to you, I felt extremely hurt," Asamoah told Asempa FM.

"I am only human. Nobody can tell me he will be happy over such a decision. If you put yourself in my shoes, you will understand.

"I felt hurt as a human being. I am not the first person to be stripped of the armband. But mostly it happens when one has been embroiled in a scandal. Take the John Terry example.

"Honestly I was hurt. I felt pain in my heart. I will say the coach did not do well. He took his decision but how he went about it was wrong, to be honest.

"I was talked to by the president of Ghana and other senior statesmen to see the larger picture and life. And I took everything in my stride.

"I have no problem with the coach. We are very cool and we look forward to the future.

"My goals helped the country to qualify for the world cup and looking at how I have served the country, I wasn't expecting such decision from the coach," he added.

Gyan is Ghana's all-time top scorer with 51 goals in all competitions.

He has represented Ghana at three FIFA World Cup tournaments.