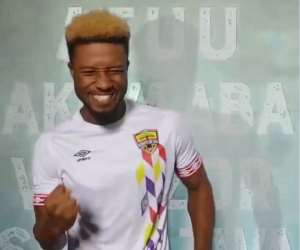 Hearts of Oak have officially unveiled their new striker Bernard Arthur in the ongoing transfer window.

The lanky forward joined the Rainbow boys on a free transfer after ending his stay with Algerian top-flight side AS Aïn M'lila.

The club's official statement reads "We are delighted to announce the signing of striker Bernard Arthur.

"The former Ghana youth international has signed a long term contract with our club."

He had a stint with Tanzanian giants Azam FC before leaving to join the Algeria Ligue Professionnelle 1 club last year.

Arthur scored ten (10) goals in his 24 appearances for Liberty Professionals during the 2016/17 Ghana Premier League season.