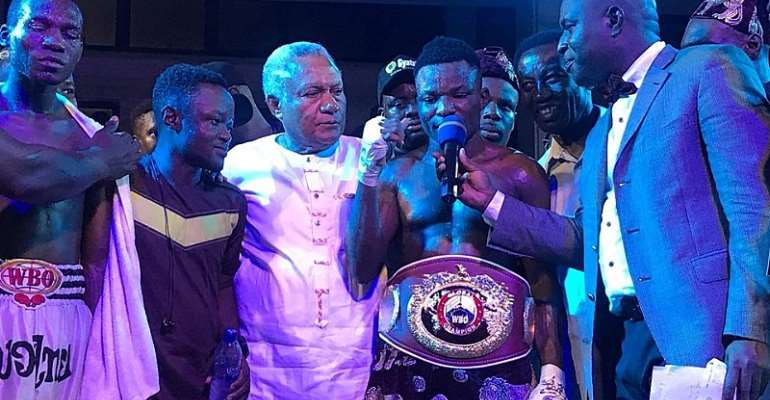 Ghana’s Wasiru Mohammed knocked out Tanzanian tough customer, Loren Japhet in the 11 round to add the WBO Global title to his WBO Africa in an exciting bout at the Accra Sports Stadium on Saturday night.

The new champion now boasts of an unbeaten record of 11 fights and 11 wins.

His managers John Marfo and Ellis Quaye said they are going to push his to the world level so that he becomes the next world boxing champion from Ghana.

Mo Wasiru earlier before the fight Wasiru told the media wanted he wanted blood to suck, while his opponent Japhet replied that in Tanzania, they eat lions, setting the stage for a big showdown which both boxers lived up to, and Wasiru was devourer and winner.

Though Japhet did well to fight to the 11th round, Wasiru was destined to win on June 29, 2019, and he did it marvellously.

WBO Africa president Samir Captan hailed the champion and advised him to train harder as there are so many good boxing contenders in his rank and the WBO ratings.

Some companies who have associated with the Gyata bi brand and showed up at the event were Alisa Swiss Spirit Hotel, Adehyeman Savings & Loans, Car mu and Tema based Alpha Industries, producers of Top Choco.

In the supporting bouts, former Black Bombers captain, Manyo Plange gave a good account of himself to prove that he is still strong and needs to be promoted to hit the world-class level.

Eric Quarm also showed that he can box and must be supported to reach the top.