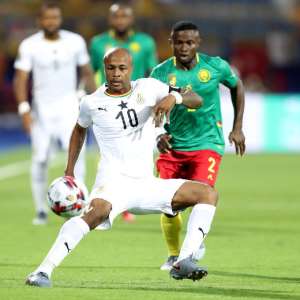 The four-time African champions failed to snatch all three points against the Indomitable Lions in their second group game in the ongoing Africa Cup of Nations.

Ghana are yet to win a match in the tournament but the former Hearts of Oak and Celtic star beleives the stalemate with the defending champions is a good result for the Black Stars.

"Drawing with the defending champions [Cameroon] is a fair result for the Black Stars," he said on SuperSports.

"It was a tough game for the Black Stars but Ghana now finds itself in a difficult situation because they could win all the three points.

"The game totally changed with the introduction of Kwabena Owusu and Asamoah Gyan but Ghana could not win the game.

"For me, all is not lost because they have Guinea Bissau to play and I know they will win to qualify for the next round," he added.

Kwesi Appiah and his boys are languishing at the 2nd position with two points after two matches played.

Ghana will play Guinea Bissau in their final group game on Tuesday, July 2, 14:00GMT at the Ismailia Stadium.