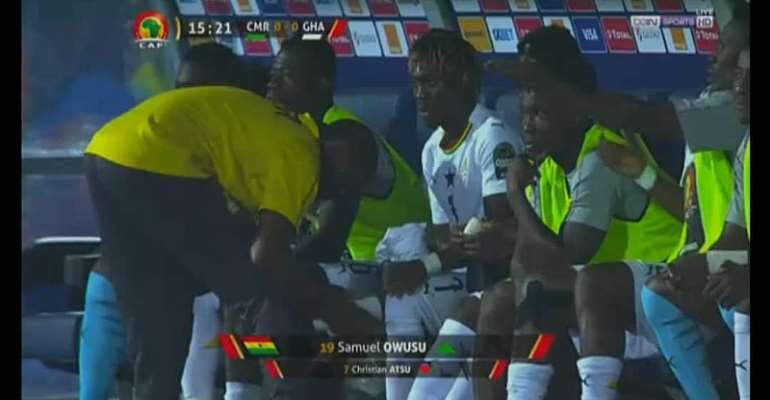 The Ghanaian International who is one of the top players for the side could not last the entire duration of the first half in a crucial match in which they needed a win to revive their chances of progressing from their group.

After playing 13 minutes, he was forced off the pitch and replaced by young prodigy Samuel Owusu.

Having been enterprising in the early minutes of the match, the player fell to the ground holding the back of his thigh after firing a shot from outside the 18-yard box of the Indomitable Lions.

Despite making an effort to play through the injury, the severity of the pain in his thighs forced the medical team to call on the coach and his technical team to take him off.

The Newcastle winger is expected to undergo examination and a scan in the next 24 hours to determine how serious the injury is. He has joined fellow winger Thomas Agyepong who is also nursing an injury he picked up when Ghana played Benin last Tuesday.

His injury comes as a big blow for Ghana who is bidding to win her 5th AFCON title this year after failing to do so in the last 37 years.

W/R: Five wounded after residents of Ampatano and Kamfakrom ...
4 minutes ago