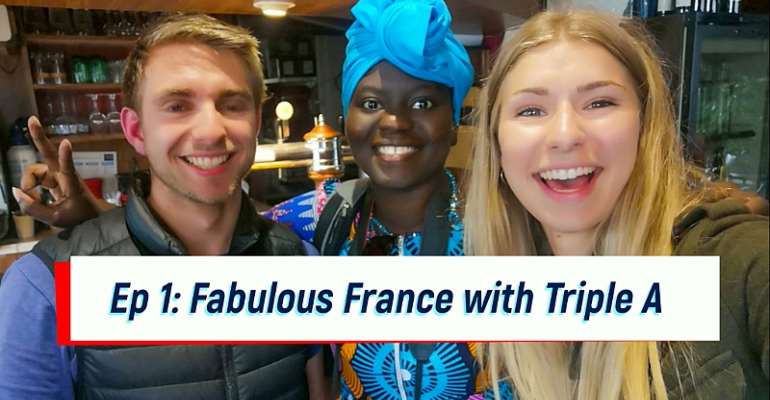 Ghana's only accredited reporter at France 2019, Angela Akua Asante, has released the first episode of her FIFA Women's World Cup-themed series, "Fabulous France with Triple A".

The Under-30 football journalist spent her first week in Paris where she witnessed France's 4-0 demolition of South Korea in the opening match live from the Parc des Princes. Over the weekend, she sat down with Dr Roxane Coche at the Place des Vosges in the French capital where she carried an exclusive interview with the French-born University of Florida Assistant Professor. In Episode 1, Coche argues that the 2019 FIFA Women's World Cup deserves bigger venues.

The first episode of 'Fabulous France with Triple A' also includes analysis of South Africa and Nigeria's disappointing start to the tournament as they lost 3-1 and 3-0 to Spain and Norway respectively on Matchday 1. International sports reporter Chibuogwu Nnadiegbulam features on the show to discuss these matters.

Meanwhile, Triple A's mission as a self-proclaimed "unofficial Ghanaian ambassador" is still very much on course. No Black Queens, no problem. French locals are still getting a feel of Ghana's shine thanks to reporter Angela Akua Asante who revealed on Tuesday, after spending 18 hours editing the 100% female produced show:

"Most fans at the Parc des Princes were excited to be filmed and interviewed by me -- more so when I told them that I'm from Ghana, a country in West Africa.

"Some were even happy to pose for the camera, chanting: "Vive Le Ghana" (Long live Ghana), and "Le Ghana c'est le feu" (Ghana is lit). Parisians are incredibly fun people!"

Watch the first episode of Fabulous France with Triple A, available right here in 1080p HD: