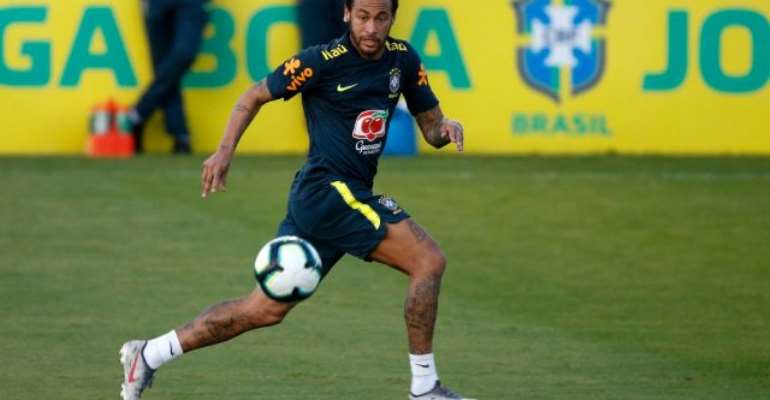 The Brazilian football star, Neymar, has strongly denied an accusation that he raped a woman in Paris.

According to a police report filed in São Paulo, the woman alleges that the attack took place in a hotel in the French capital, where Neymar plays for Paris St-Germain (PSG).

Neymar's management put out a statement saying the footballer "completely repudiated" the accusation.

Neymar is now in Brazil training with the national team for the Copa América.

What are the allegations?
According to police documents, the woman - who has not been named - got to know Neymar on Instagram and he suggested they meet in Paris.

He provided her with an air ticket from Brazil to France and a reservation at the Hotel Sofitel Paris Arc Du Triomphe.

When Neymar came to the hotel on 15 May, he was "apparently drunk," the woman alleges.

After conversation and embraces, "at some point, Neymar became aggressive, and through violence, engaged in sexual intercourse against the will of the victim," the police document states.

The woman returned to Brazil two days later, without reporting the alleged incident to French police, because she was "emotionally shaken and afraid to register the facts in another country," the document continues.

What does Neymar say?
In a statement released after the accusations became public, the footballer's management said: "We completely repudiate the unjust accusations and, above all, the exposure in the press of an extremely negative situation."

The footballer's father, Neymar dos Santos, told Band TV in Brazil on Saturday that "it is clear that it was a trap".

"If public opinion is not cleared up, and if we can't show the truth rapidly, this will snowball. If we have to show Neymar's WhatsApps and the conversations with this girl, we will," he added.

Is Neymar ready for the Copa América?

The 27-year-old forward has been stripped of the captaincy of Brazil, following recent disciplinary issues.

He was also reportedly involved in a dressing room brawl.

The Copa América - South America's national team championship - takes place in Brazil from 14 June to 7 July, with the hosts taking on Bolivia, Venezuela and Peru in Group A.

Neymar had to stop training on Tuesday when he suffered a knee strain, although the injury was not thought to be serious.