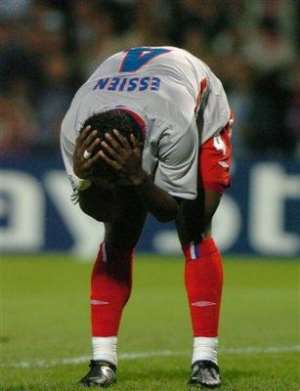 Ghana midfielder Michael Essien looks doubtful to make the African Nations Cup in Egypt after picking up an injury playing for Chelsea on Monday. The 23-year old suffered damage to his ankle ligament after he was fouled by West Ham's Nigel Reo-Coker in a league game. (VIDEO) The injury could leave the Ghanaian out of the squad for the 2006 Nations Cup which kicks off in Egypt on 20 January. Though it's still too early to tell how serious this injury is, Essien could be out for up to eight weeks. In another blow for the Black Stars coach, Ratomir Dujkovic is considering reshuffling his midfield line up following an injury to Udinese's Sulley Muntari. The player has been ruled out for at least a month with a serious ankle injury. Muntari pulled out of training on Saturday with scans having now confirmed that ankle damage has been sustained.
The influential midfielder with Essien are part of Dujkovic's 23-man squad for this month's Egypt tournament.
Muntari will have to wear a special protective bandage for the next twenty days, and then have further tests to evaluate the full extent of the injury.
The 21-year old has established himself as a player to watch in the Italian Serie A this term with a series of powerful displays that have not gone unnoticed across Europe.
Whilst Juventus and Manchester United have both been credited with holding an interest, it seems likely that any possible January transfer window enquiries will now be put on the backburner.