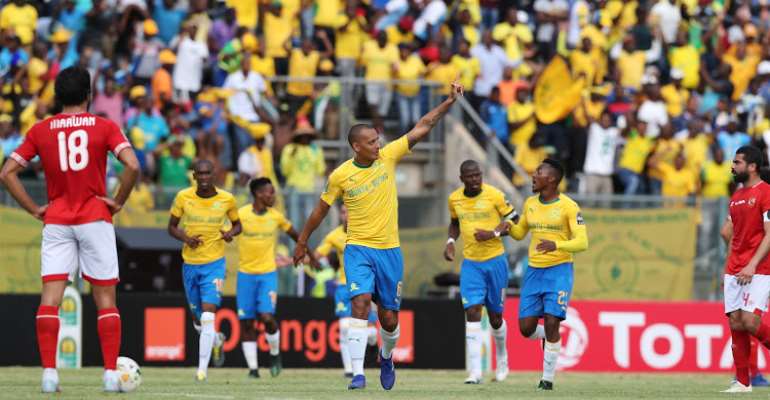 The South African champions will carry a 5-0 aggregate lead against the Egyptian giants into next weekend second-leg clash in Egypt.

The hosts deservedly broke the deadlock 14 minutes into the game and it was Zwane who opened the scoring.

Sirino was tormenting the Red Devils defence and he managed to grab an assist with the half-hour mark approaching.

The Uruguayan winger's set-piece was headed home by Wayne Arendse to make it 2-0 to Sundowns, much to the delight of the home crowd.

Zwane was also having a good game as he was brilliantly denied by El Shenawy, before hitting the woodwork just after the half-hour mark.

Al Ahly pressed Sundowns towards the end of the first half, but keeper Denis Onyango made a great save to deny Amr Al Sulaya.

The score 2-0 to Sundowns following an impressive first-half display by the 2016 Champions League winners.

Sundowns continued their dominance following the halftime break and they were awarded a penalty after Maboe was fouled by El Shenawy.

Ricardo Nascimento then stepped up and the Brazilian defender beat Shenawy from the box to make it 3-0 to Sundowns.

The Brazilians continued to attack after extending their lead and Sirino, who had a good first half, got the goal he had been looking for.

The diminutive attacker beat El Shenawy with a powerful shot to make it 4-0 to Sundowns, who were running rampant against Al Ahly.

Moroccan marksman Walid Azarou was introduced by Al Ahly in the closing stages as the record eight-time Champions League winners searched for an away goal.

However, Sundowns continued to attack and former Al Ahly attacker Phakamani Mahlambi haunted the Red Devils in the latter stages of the game.