Anthony Annan Accused Of Neglecting His Wife And Kids 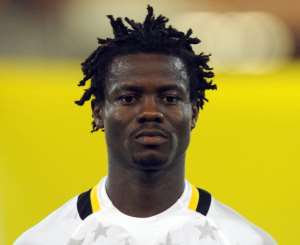 Mrs. Gifty Annan, wife of Anthony Annan has accused the footballer of refusing to perform his marital duties.

According to her, the former Ebusua Dwarfs star has neglected her and their four kids for a different woman who he has two children with now.

“Anthony Annan performed my traditional marriage when I got pregnant for him. He was then playing for Accra Hearts of Oak. We proceeded to marry under ordinance when he was leaving to play IK Start in Norway," Mrs Gifty stated on Happy FM.

“The last time I or the kids set eyes on Anthony Annan was two years ago when he came to perform the naming ceremony of our last child. He accused me of infidelity and said he was no longer interested in the marriage.”

She further explained that although Annan has called for a divorce, the necessary requirements needed to be done in order to enforce the divorce has not been done by the player.

"As at now, I do not know if I am still married to him because my family never accepted his request for a divorce and we have also not legally divorced since we married under ordinance marriage.”

When asked if Annan caters for the kids, she said, “He occasionally sends some money for the kids but it’s not enough to cater for all their needs.”

Annan was an integral member of the Black Stars team that reached the quarter-final of the FIFA World Cup in 2010.

He has netted two goals in 64 caps for the Black Stars.