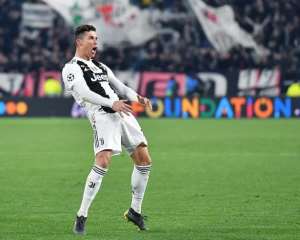 C. Ronaldo has been charged by UEFA for improper conduct during Juventus' 3-0 win over Atletico Madrid in the Champions League last 16.

Ronaldo could face a similar fine to Atletico Madrid coach Diego Simeone, who he mocked with his goal celebration in the Italian side's victory following a 2-0 defeat in the first leg in Madrid.

Simeone was fined £18,000 by UEFA after grabbing his trousers provocatively after Atletico's victory at the Wanda Metropolitano Stadium but watched Ronaldo fire a hat-trick as the Turin side completed a remarkable victory from behind on Tuesday.

Juventus face Ajax in the Champions League quarter-final first leg in Amsterdam on April 10, but media reports claim he the Portugal striker will not face a ban with the decision being made by UEFA on March 21.