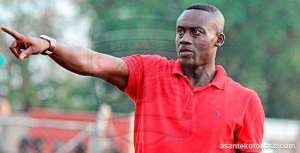 Former Asante Kotoko head coach, Michael Osei has called on the club to excel at the Group stage of the CAF Confederation Cup.

The Porcupine Warriors have booked their place in the group stages of the competition for the first time in 11 years after eliminating Cameroonian Club Coton Sport.

The Star Madrid coach has backed the Club to progress past the group.

“I monitored them throughout their qualification and they did very well, I was personally impressed with the kind of football they played,” he told NL Radio.

“They should keep up with this kind of performance and I believe they will make it past the group stage.

“No one expected them to get to the group stage and it is a plus for them so I will urge them to work harder.

“This stage is more difficult because you have the best teams all at the Group stage.”

The Porcupine Warriors have been drawn with ZESCO United, Nkana FC of Zambia and Sudanese side Al Hilal.

Kotoko will begin their Group stage campaign with an away game against Al Hilal of Sudan on February 3.