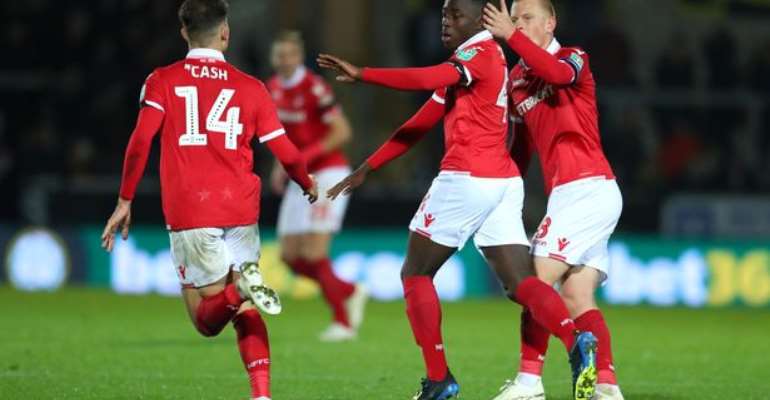 The 17-year-old marked his Reds debut with a well-taken goal after coming off the subs' bench, to deliver one of few positives on a disappointing night against Burton Albion.

Appiah made a big impact after coming on in the 84th minute and, after seeing him work on the training pitch every day, Dias believes there is plenty more to come from the winger, who can also play in a forward role.

'It was his first match with the first team and he scored, so that is very good for him,' said Dias.

'He is a good player, he is still young, but he is fast and strong. So I think he is going to be a top player.'

Reds boss Aitor Karanka was also pleased with the contribution made by the teenager, who showed good composure to latch onto the end of a Dias pass, before beating former Forest keeper Dimi Evtimov at the second attempt.

'He was very good. Arvin, since he started with us in pre-season, I have always said that he could play in games like this, against Stoke, Bury or Newcastle,' said Karanka. 'Here, when the game was bad for everyone, he went to the pitch and scored a goal.

'He showed how good he is. He was the only positive, but also a very good positive, on the day.'

With Hillal Soudani having picked up an injury at Burton, there could be a window of opportunity for Appiah to secure a place on the bench against Sheffield United on Saturday as well.

'It is not just about the injuries, it is about the attitude of some players,' said Karanka.