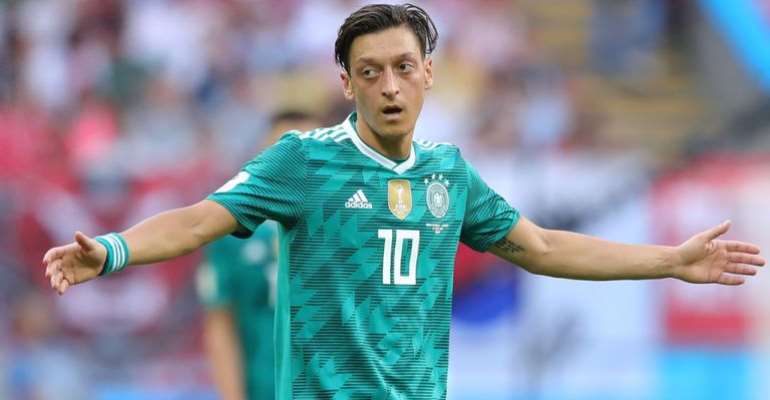 Mesut Ozil's agent has hit back at "foolish" Bayern Munich president Uli Hoeness claiming his criticism of the former Germany international has "nothing to do with football".

Ozil announced his retirement from international football - accusing some German FA officials of racism - following a storm of abuse after he was pictured with Turkish president Recep Erdogan ahead of the World Cup.

The German FA (DFB) rejected Ozil's accusations and called out the 2014 World Cup winner for his failure to provide answers regarding his controversial photograph with Erdogan - who has been accused of abusing human rights laws and restricting the freedom of the press.

Hoeness slammed the decision, describing Ozil as "weak", adding the 29-year-old has "been playing dirt for years".

However, Dr Erkut Sogut, Ozil's agent, has deemed Hoeness' assessment of his player as unfair - pointing him in the direction of the Arsenal midfielder's stats and achievements.

In a statement to Goal, he said: "The comments of Mr Hoeness miss the point completely, as they have absolutely nothing to do with football. He is trying to divert attention away from the real issue, the issue of racism and discrimination in Germany, which is resurging once again within everyday German society.

"As Mesut said in his statement, he accepts reasonable and fair criticism of his football and deals with that as part of the job. However, Mr Hoeness cannot even provide any actual evidence to back up his foolish statements that are clearly exaggerated. In this case, the stats are clear. Twenty-three goals, 40 assists - which is a German record - and five-time German player of the year - three of which come after 2014.

"He claims that Mesut has been a 'ghost' for years, but what 'ghost' wins all these awards and has this much success? Mesut created more chances in the 2018 World Cup per 90 minutes than any other player, but, of course, he singles him out for criticism. As the president of Bayern Munich is it not best to focus on the performance of his own players seeing as eight of the Germany team play for the club.

"If Mesut is such a bad player, what does this say about his opinion on Joachim Low, Arsene Wenger and Jose Mourinho? These are three elite managers who praise Mesut as one of the best in his position. It is laughable that he thinks he is more qualified to judge footballing abilities than these people, with fabricated statistics.

"The facts speak for themselves and anyway who is he to speak about Mesut in this way? These lies are cheap, stereotypical and baseless comments - made without any foundations - that allow hurtful news to spread.

"Mr Hoeness, we will not waste any more time or energy talking about a subject clearly you know nothing about. Not only is he a disgrace to himself, but also and more importantly a shame to German football and the people of Germany."

It's in our collective interest to take Covid-19 vaccine - B...
17 minutes ago

Kpone-Katamanso ready to for COVID-19 jab
24 minutes ago