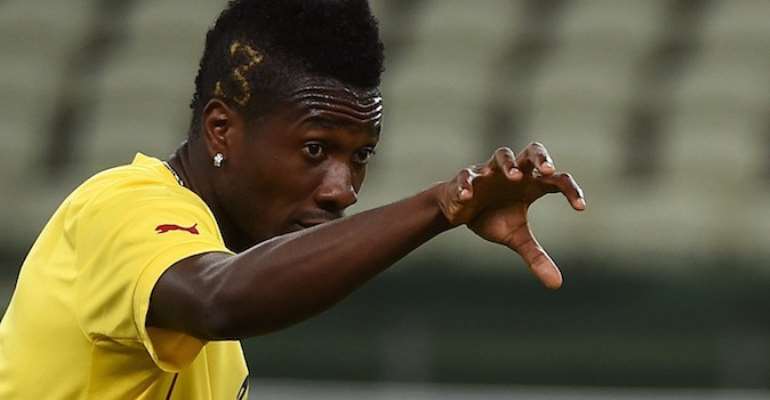 Gyan's name was mentioned when the vice chairman of the Player Status Committee of the Ghana Football Association, Kofi Manu boasted that in the early stages of Asamoah's career, he Manu assisted him to get playing time.

He was part of a number of high-profile personalities including Ghana President Akufo-Addo and his Vice Mahamudu Bawumia against whom serious allegations were made in #Number12 which depicts incidents of alleged corruption in Ghana football.

Manu, known popularly in football circles as Blue Blue claimed that he helped Gyan's father to get his sons playing time in the national team.

He told undercover operatives posing as fixers that he assisted Gyan and his senior brother Baffour Gyan to get games for the national team when he was approached by their father.

Manu made the disclosure when the purported match-fixers asked him to assist a Ghanaian player to get a national team call-up. Initially, he rejected the bribes offered but later accepted another sum of money as appreciation for his efforts.

Asamoah Gyan, 32, began his career in 2003 with Ghanaian Premier League club Liberty Professionals and has since gone on to make 105 appearances and is the record-scorer with 51 goals for the Black Stars.

His senior brother, Baffour Gyan, 37, is a former Dynamo Moscow striker and made 25 appearances and scored four goals for the Black Stars.

Manu claims Anas failed in attempts to bribe him

It will be recalled that in January this year, Manu alleged that Anas tried to set him up twice with bribes but he failed on both occasions.

According to Kofi Manu, who also doubles as CEO of Techiman City Football Club, there are attempts by some ‘football people’ who want to disgrace the FA president Kwesi Nyantakyi and his lieutenants by getting them caught in bribery scandals.

Kofi Manu bemoaned the ill tactics being used by Anas and his crew but revealed that those of them who have been targeted are well aware of the plot and have become extremely cautious in dealing with people.

There is this grave attempt by some football people to disgrace FA president Kwesi Nyantakyi and those around him. Anas and his people have attempted to set me up twice but on both occasions, they failed. I was offered a bribe of GHc3,000 and another which was over GHc20,000 to approve the floating status of some players but I rejected both. Hearts of Oak’s former operations guy called Acquah was one of those who were used to offer the money to me, Kofi Manu revealed on Happy FM.

Some of us have been targeted but we are too smart to fall for their bait. In fact, the mode of operation being used by Anas and his crew is so wrong and he is a disgrace. They are always offering money to people to do things while videoing them. Why don’t they show their faces too or show where monies are not received or are returned? It’s time we wake up and make him know that what he is doing is wrong, Kofi Manu added.