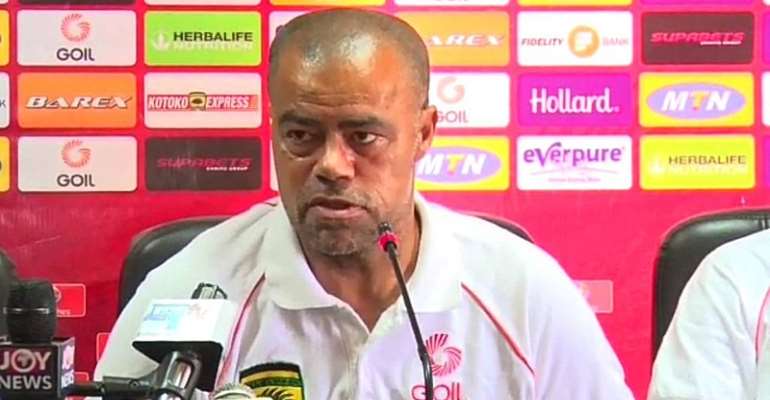 Asante Kotoko head coach, Steve Pollack has refused to blame his players for failing three penalties insisting penalty kick is like a lottery.

The MTN FA Cup champions began their CAF Confederations Cup on Sunday at the Baba Yara Sports Stadium in a slim win over CARA Club of Brazzaville in the preliminary round of the competition.

The Porcupine Warriors were wasteful in front of goal after squandering a staggering three penalties award to them by Senegalese referee Issa Sy before striker Yakubu Mohammed climbed off the bench to convert a late penalty to hand his side a slender victory.

Reflecting on the outcome of the game, Coach Polack commended his charges attitude and desire to win the match but was left astonished by their profligacy.

"I believe it's one of the best performances since I have been here, the attitude, desire and passion of the players was something else. I am only disappointed we didn't win by more goals, missed few chances but will work on that at training before the second leg," Pollack told Oyerepa FM.

"The supporters were tremendous as always, the crowd was behind us and that's a go sign going forward."

The English gaffer added, "We have been training on penalties and it's amazing how we lost them but don't forget penalty shootouts are like the lottery but from where I was sitting, I didn't see all the penalties and five of them in a game, it's my first time."

"Yakubu Mohammed coming in later was strategic and I'm not surprised he is the toast of the fans, he has always been and others also think otherwise. He has a lot to offer. I'm confident we can qualify notwithstanding where we the match will be played, even if it's in England."

Kotoko will need to avoid defeat to progress to the next stage of the competition in the return encounter in fortnight time in Congo.