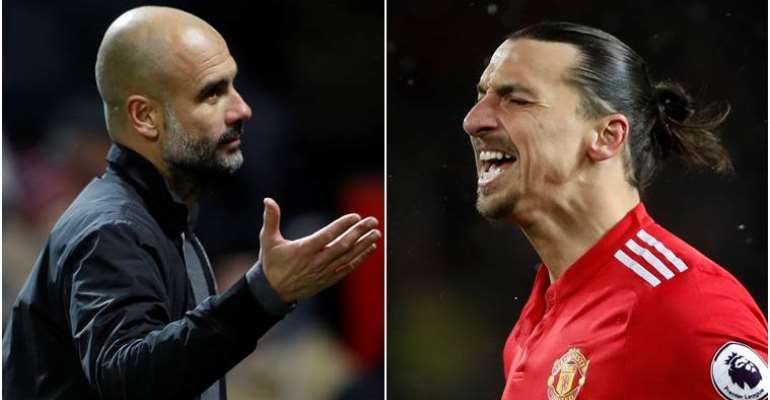 Ibrahimovic joined Barcelona in 2009 and played under Guardiola, but only stayed at the club for a season as he struggled to feature regularly at the Nou Camp.

The now-Manchester United striker blames his failure at Barca on Guardiola, criticising his man-management and personal skills.

Speaking to Sky Sports Italia, Ibrahimovic said: ‘I’d walk into a room and he’d walk out. I’d go to meet him and he’d go somewhere else. I understood that there was something beyond football.

‘The problem was his, it was he who hadn’t solved the problem with me. I remember on my first day, he told me that Barcelona players don’t turn up for training in Ferraris or Porsches.

‘He’d already judged me then, but if you don’t know a person then you can’t judge him. I had my experience with him, I don’t know about others.

‘I read the same thing had happened to (Mario) Mandzukic and (Samuel) Eto’o. He wasn’t the worst coach I’d worked under, but he was certainly the most immature because a man solves his problems.’

The attack is the latest drop of bad blood between United and City since the Manchester derby on Sunday, won 2-1 by the visitors at Old Trafford.

After the game there was a scuffle between players in the tunnel after United manager Jose Mourinho accused Guardiola’s players of celebrating too obnoxiously – the coach had a bottle thrown at him and was doused in water and milk.

City coaches’ goading of Ibrahimovic may have played a key role in the explosive Old Trafford tunnel bust-up on Sunday. Spanish newspaper Marca claim they told the 36-year-old: ‘Ibra, you talk a lot but you move a little.’

Guardiola offered a half-hearted apology for the incident, leading Mourinho to say the two clubs were divided by ‘behaviour and diversity’.

Ibrahimovic has now waded in on Guardiola, saying the problems began between the pair when he was dropped for questioning Barcelona’s reliance on Lionel Messi.