AFCON 2019 QUALIFIERS:How the players were rated after an impressive showing against the Ethiopians 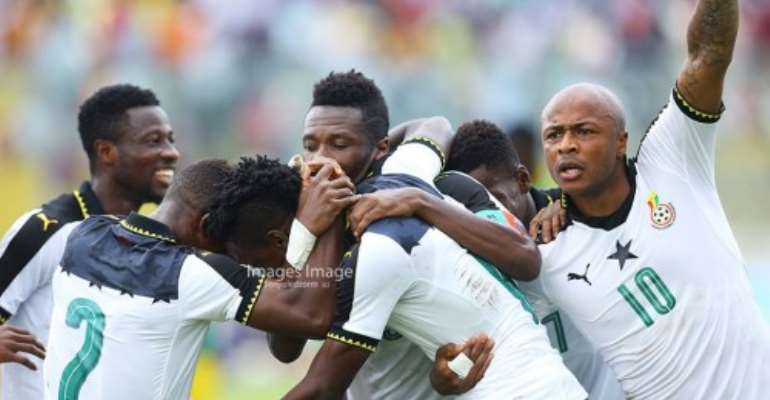 The Black stars made a perfect start in the 2019 AFCON qualifiers. They thumped the Walias Of Ethiopia 5-0 take an early lead in Group A.

The first match under the 2nd stint of coach Akwesi Appiah, this is how the 13 players who graced the pitch fared

Richard Ofori 7
The only home based player in the first XI was calm in post. He always starts attack from the back like a modern day goal keeper instead of balooning the ball in the air. The Ethiopians didn't trouble him that much but was very alert anytime they asked a question. It's always a good thing for a keeper to keep a cleansheet. All in all, It was a good day in office for the Wa Allstars goalie.

Afful Harison 6
The Columbus Crew right back had an okay game. He faced no hurdles in defence as the Ethiopians attacked through the middle and not the flanks.

Agbenenyu Lumor 6
Quite an impressive debut for the 1860 Munich leftback. Like the other fullback, he faced no problem defensively. He had a hand in the 5th goal when the Ethiopia goalie made a mess of his cross only for Dwamena top tap the ball into the empty net.

Daniel Amartey 7
The Leicester City man did a good job in defence. His game reading was top notch so was his passes from the back.

John  Boye 6.5
Boye did put in a good shift at the back. His tackles were good. He commanded the back four really well. He scored a classy goal to cap of his good performance.

Thomas partey 6.5
Partey played as a holding midfielder and did very well. He kept everything simple.

Ebenezer ofori  8
The Stuttgart man was the star of the day. His touches 'wowed' the fans. His distributions were impressive. His display was great for a player making his home debut. He capped the brilliant display with a superb goal.

Thomas Adjapong 7.5
The winger was great on the day. He was a hell for the Ethiopian defence. His cross led to the opener.

Andre Ayew 7.5
The assistant captain was good on the day though he failed to register a goal. He was all over the attacking 3rd trying to help unlook the Ethiopia defence.

Dwamena Raphael 8
The striker had a great debut. His movement was spot on. He scored two opportunistic goals. What a debut for the young lad

Asamoah Gyan 5.5
The captain had an average game by his standard. He didn't seem fit enough for the game. His goal bound header which deflected off an Ethiopian defender fetch the opener.

Majeed Warris 5
He came on for Gyan when the victory was certain. He added little to the attack.

Afriyie Acquah 5
He replaced Partey and did well with his passes.
Jordan Ayew 5
The game was almost over when he replaced his brother. He had little to make a big impact.

Fans 10
For the first time since the 2014 World Cup qualifiers, the crowd at the Baba Yara stadium was massive. They cheered the team from start to finish.