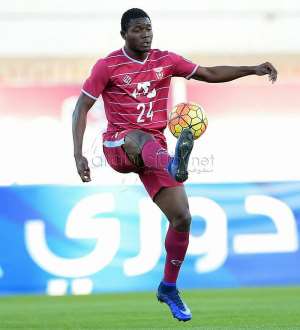 Ernest Barfo, Former Liberty Professionals and Bechem FC striker now playing in oil rich state of Kuwait says he is ever ready to play for the Black Stars if he gets the opportunity.

Speaking to Yours Truly at the York 250 Gym at Mamprobi in Accra, the soft spoken goal poacher who was wanted by Accra Hearts of Oak, Accra Great Olympics, Tema Youth and other clubs on the continent and Europe said he is looking forward to donning the Black Stars jersey in the near future.

Now playing for Al Nasar who placed third in the Kuwaiti Top League, he hinted that the competition was tough because other nationals have registered to play and everyone is trying his best.

Barfo who scored 9 great goals in 14 appearances said he is ever ready, any time to play for his national team.

He hinted that fans always ask him why the national team has not invited him for his pace and skills. He is however cool, and believes his time will come.

He lauded the appointment of coach Kwesi Appiah noting that he gives chance to young players.

He also commended the appointment of GFA president Kwesi Nyantekyi on the FIFA Executive Council saying it is good for Ghana and Africa.

On Sunday’s game against Ethiopia, he predicted a massive goal score line, and urged the Black Stars to focus on the 2018 FIFA World Cup Qualifiers as all hope is not lost, because in football anything can happen.