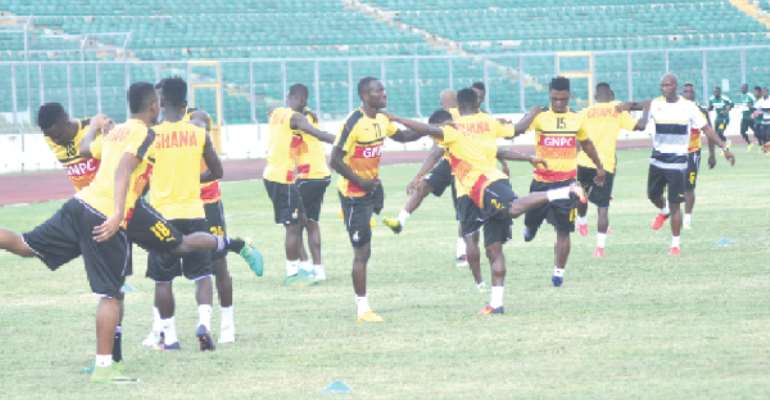 The Black Stars returned to the Baba Yara Stadium in Kumasi for the first time in three years last Monday with a mission to renew their relationship with Oseikrom fans via a number of charitable deeds ahead of their 2019 AFCON qualifier against the Walias of Ethiopia on Sunday.

The charitable gestures were not defined by the team's management committee headed by George Afriyie, but it is likely a donation would be made towards the construction of the new Baby and Mother Unit at the Komfo Anokye Teaching Hospital (KATH) in Kumasi later in the week.

Mr Afriyie told the Graphic Sports in Kumasi that the proposal to support the project of the First Lady, Rebecca Akufo-Addo, by saving the lives of unborn babies and their mothers would be considered.

He said the charitable works may not necessarily mean donating to orphanages but they may even include presenting equipment to some key institutions in the metropolis.

But even before the donations, the players appeared to have reconciled well with the fans as they were applauded intermittently by the sizeable crowd at the Baba Yara Stadium last Monday.

Indeed, their reception at the Kumasi International Airport might not be as rapturous as it used to be but it was good enough to make the players feel at home.

Per the team's itinerary, Mr Afriyie and his vice, Osei Kwaku (Palmer), are to engage the public on a number of radio programmes to whip up interest and support for the Black Stars after an apparent frosty relationship in their last campaign in Kumasi.

'Despite our wonderful reception, we do not want to take chances and would still want to appeal to the fans to fill the stadium and create an intimidating atmosphere to win the match on Sunday,' Mr Afriyie told the Graphic Sports.

The team is also expected to pay a courtesy call on the Asantehene, Otumfuo Osei Tutu II, at his convenience where he would be expected to admonish the players to die a little for Ghana.

The Stars are expected to begin on a good note to enable them to pick one of the slots for Cameroun 2019.