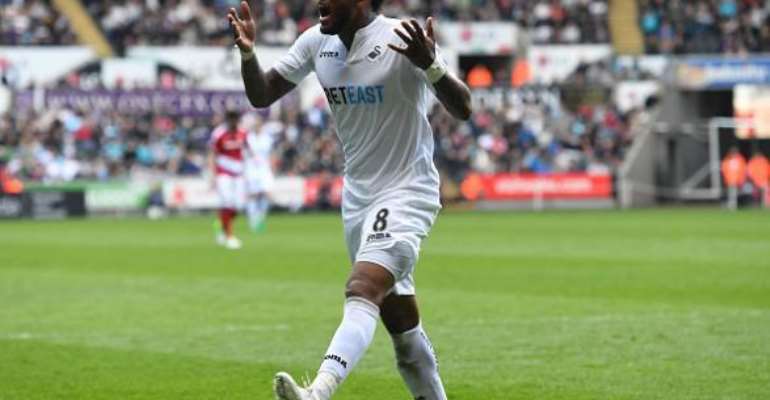 Swansea and Middlesbrough shared a goalless draw at the Liberty Stadium which does little to alleviate their respective Premier League relegation worries.

Hull’s victory over West Ham on Saturday had left Swansea outside the drop zone only by virtue of them having a superior goal difference to the Tigers.

Middlesbrough’s position is ever more precarious – five points adrift of Swansea, albeit with a game in hand – and they might come to rue substitute Rudy Gestede failing to accept the best chance of the match in stoppage time.

So a goalless draw, which highlighted the failings of both sides in front of goal, will only serve to encourage the teams around them.

There was no shortage of endeavour or commitment as would be expected in a classic relegation six-pointer, but neither team could provide the defining moment of quality which would have meant so much.

Swansea suffered a blow before kick-off when top scorer Fernando Llorente was ruled out with a calf problem.

Llorente has shown himself to be one of the best headers of a ball in the Premier League since he left Sevilla last summer and his absence hurt Swansea and boosted Boro in equal measure.

On many occasions Swansea found themselves in decent crossing positions, but the ball had to be too precise to find Llorente’s replacement Jordan Ayew and a Boro defence well-marshalled by skipper Ben Gibson coped comfortably.

Boro had to withstand an early Swansea flurry which saw Martin Olsson fire over an angled shot and Ayew sting Victor Valdes’ palms from 20 yards.

But the Middlesbrough defence stood increasingly firm, the real moments of Swansea danger in the first half coming from Gylfi Sigurdsson’s expert dead-ball delivery in which no home attacker could apply a telling touch.

Boro’s threat was also fleeting in a first period which started brightly but quietened down as both teams began to settle.

They looked to utilise the frightening pace of Adama Traore on the break, one such lightning raid ending with Leroy Fer cautioned for a cynical trip.

Alvaro Negredo and Stewart Downing had shots blocked in the same attack, the former bringing optimistic appeals for a penalty after the Spaniard’s shot had struck the arm of Alfie Mawson.

But the Swansea defender’s arm was in a natural position and his close proximity to Negredo ensured that referee Bobby Madley was not interested in pointing to the spot.

Tom Carroll went close to breaking the deadlock with a 25-yard drive which whistled past Valdes’ post as Boro reorganised with targetman Gestede replacing the injured Gaston Ramirez.

The game’s most dangerous moments centred around the two best players, Sigurdsson and Traore.

Sigurdsson had one tame effort before the Iceland international produced a delicious touch to find a yard of space and unleash a 25-yard pile-driver which Valdes stretched to push away.

At the other end Traore dragged his shot wide before outpacing Mawson and picking out Adam Clayton at the far post.

Clayton headed the ball down into the path of Negredo, but Lukasz Fabianski was out quickly from his goal to prevent the striker from profiting.

Negredo had another opening after 75 minutes when Gestede nodded down Bernado Espinosa’s long ball into his path.

He did well to hold off Mawson but he was off balance when he took a shot which ended wide of Fabianski’s goal.

Swansea had late opportunities when Sigurdsson’s free-kick was deflected wide – the hosts believing a penalty might have been awarded after the ball had struck a stray Boro arm – and Mawson’s goalbound header was cleared by Marten de Roon.