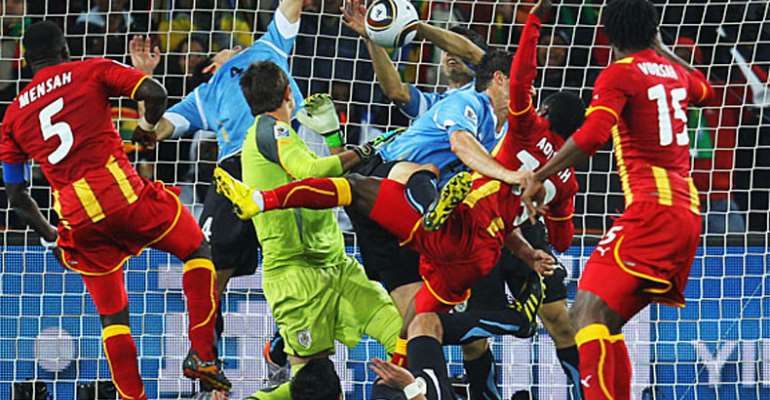 Former Premier League referee David Elleray says the award of penalty goals for handballs on the goal line is under consideration by football’s law-makers.

Incidents such as Luis Suarez’s blatant handball to deny Ghana a goal against Uruguay in a 2010 World Cup quarter-final could in future result in a penalty goal being given, rather than a penalty kick.

Suarez was sent off and Ghana were awarded a penalty, but it was missed and Uruguay ultimately progressed to the semi-finals.

Elleray, a former Premier League referee who is now the technical director for the International Football Association Board (IFAB) which controls the game’s rules, says penalty goals are a possibility and that video technology could help push the change through.

“The IFAB is looking at 25 areas of the game aiming to make it fairer and handball is one of those,” he told The Times.

“One of those areas we are discussing is incidents similar to the handball by Luis Suarez in the 2010 World Cup when he handled the ball on the line against Ghana, preventing a certain goal.”

“A lot of people have said in those kind of incidents why can’t you give that as a goal if it is clearly going in? That is something video assistant referees could also help with.”

“Some people are against the idea still, however, so it is something that needs to be discussed in depth.”

Video assistant referees (VARs) are being tried in tournaments and matches across the globe, with the technology used successfully to disallow a goal for France and award a goal to Spain in Tuesday night’s friendly between the sides.

It is due to be used in the FA Cup from January 2018 onwards and could be introduced for the first round of the EFL Cup in August, subject to EFL board approval.