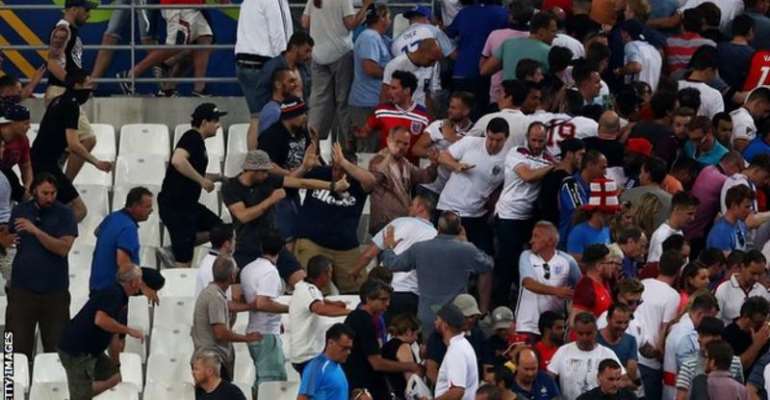 Russia will be disqualified from Euro 2016 if there is further crowd trouble at their remaining tournament matches.

Uefa, European football’s governing body, has given Russia a suspended disqualification and a 150,000 euro (£119,000) fine for disorder at the game against England in Marseille.

Russia were also charged for fan racism and lighting fireworks at the game.

Groups of Russia fans are being deported from France after repeated scenes of violence at Euro 2016.

The suspended disqualification and fine relate only to incidents that happened inside the stadium. The decision is open to appeal.

However sports minister and Russian Football Union president Vitaly Mutko said Russia will comply with Uefa’s decision, adding: “What other position can there be?”

French police blamed 150 “well-trained” Russian hooligans for clashes before England played Russia on Saturday. Six England fans were jailed on Monday for their roles in the disorder.

Thirty-five people have been injured – most of them England fans and four seriously – while a total of 20 people were arrested after three days of disorder in Marseille.

Football Association chairman Greg Dyke expressed “serious concerns” about security in Lille, where England fans and Russian supporters are set to gather over the next three days.

England fans are likely to travel to Lille before Thursday’s match against Wales in the nearby smaller town of Lens, while Russia play Slovakia in the city itself on Wednesday.

French authorities are increasing security in Lens, with 2,400 police, gendarmes and security guards backed by a riot squad on duty for England’s game with Wales.

Up to 50,000 England fans are expected – with the 35,000-capacity stadium already sold out – and drinking alcohol has been banned in the town.

Home Secretary Theresa May said more British police officers trained in football disorder are being deployed to France ahead of the match.

That will include additional British Transport Police officers on rail services around the area, following a request from French authorities.

Uefa gave Russia a six-point deduction suspended for three and a half years for supporters’ behavior during Euro 2012 – but that elapsed after Euro 2016 qualifying.

Russia were punished three times during the tournament four years ago for fans’ actions, which included setting off and throwing fireworks, displaying illicit banners and a pitch invasion.