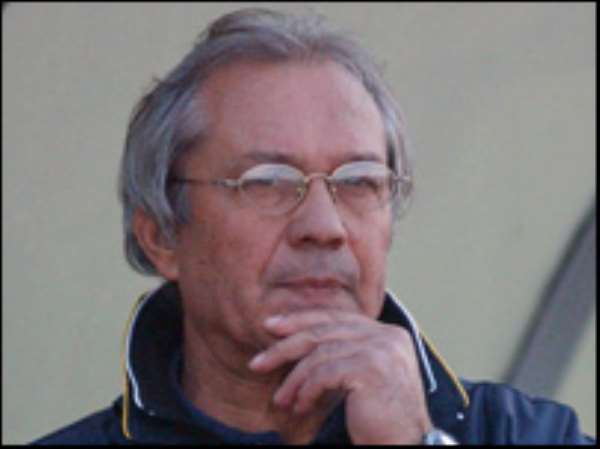 Plans for the Blacks Stars under the Serbian coach Ratomir Dujkovic has been exclusively revealed to even before he arrived in Accra last Sunday to start the job as the head coach of the national team.

A source close the coach who guided Rwanda to its first African Nations Cup last earlier this year revealed that the CAF Confederation Cup final match between Kumasi Asante Kotoko and Accra Hearts of Oak will be used as the starting point for the selection of the local players of the national team.

Other competitions like the GHALCA Top Four will also be used to spot potential local Black Stars players.

It is expected that Dujkovic will maintain majority of the foreign based players of the national team for the rest of the Group 2 of the Africa World Cup and Nations Cup qualifiers.

The foreign based players who will maintain their positions in the national team are Stephen Appiah, Samuel Kufuor, Kofi Amponsah, Michael Essien, Sulley Muntari and goalkeeper Sammy Adjei.

But just like Group 2 leaders South Africa who have recalled the country's top performers in Europe like Shaun Barlett and Benni Mac Carthy, the Serbian coach is expected to take note of the outstanding performance of two Ghanaian players in Europe who have not played in the current qualifiers.

Matthew Amoah of the Dutch team Vitesse Arnhem and George Blay of the Belgian first division team La Louvière are likely to be considered.

Both players last played for the Black Stars at the 2002 Nations Cup in Mali but have since not been invited to play for the national.

While Amoah has emerged as a prolific goal scorer even though he plays in midfield, Blay is one of the few Ghanaian players to be playing regularly in the top leagues of Europe this season.

Amoah is so far the highest Ghanaian goal scorer in Europe this season with 8 goals. Blay has played in almost all the matches for La Louvière who are currently 6th on the 18-team Belgian first division league. He fits perfectly in the right wing back position which has shown some weakness in the Black Stars current campaign.

Dujkovic's first official match is on March 27 next year when the Black Stars travel to play the DR Congo. Friendly matches in Africa and Europe are planned for the national team before the qualifiers resume.

The 1992 constitution is a tool for stealing, rigging and pl...
43 minutes ago