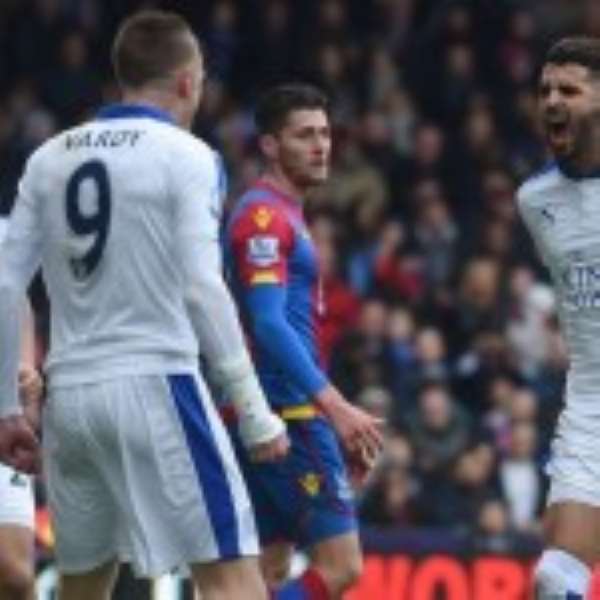 Leicester City moved eight points clear at the top of the Premier League with a 1-0 victory away to Crystal Palace .

Riyad Mahrez, who had earlier come close on two occasions, made the breakthrough on 34 minutes when he slotted home from Jamie Vardy’s assist.

Palace, who last won a league game on Dec. 19, caused Leicester problems on the day and might have snatched a point when Damien Delaney volleyed against the crossbar in injury time.

Claudio Ranieri’s men ultimately held on for a fourth 1-0 win in their last five games as they edge closer to an improbable title triumph.

Second-placed Tottenham will have the chance to cut Leicester’s lead to five points when they host Bournemouth on Sunday.

ESPN FC’s Shaka Hislop is not completely counting Arsenal out of the title race after their 2-0 win over Everton.

Arsenal beat Everton 2-0 at Goodison Park to end a run of three games without a win in the Premier League.

Everton hit the woodwork through Seamus Coleman shortly after the kick-off, but within seven minutes played they were behind.

Danny Welbeck, who had earlier deflected the ball against the outside of the post, latched onto Alexis Sanchez’s superb reverse pass and went around Everton keeper Joel Robles before slotting home.

Sanchez saw a penalty appeal waved away on 35 minutes but the Gunners doubled their advantage soon afterwards when Alex Iwobi, making his first Premier League start, broke free on the counter to score his first league goal.

Everton tried to spark a comeback in the second half but Arsenal’s victory always appeared secure as Arsene Wenger looks to ensure a strong finish to the season.

.
Chelsea, who last lost in the Premier League in Jose Mourinho’s final game on Dec. 14, faced a tough test against a West Ham side making an unexpected push for Champions League qualification.

They fell behind on 17 minutes when Manuel Lanzini produced a stunning goal, cutting inside before bending a shot into the top corner, but the scores were level by the break thanks to a superb Fabregas free kick.

Aaron Cresswell nearly restored the Hammers’ lead just before the hour mark, but his cross-shot came back off the crossbar.

Slaven Bilic’s men were soon 2-1 up, though, when Andy Carroll latched onto Dimitri Payet’s pass and thumped a shot past Thibaut Courtois in the Chelsea goal.

However, Chelsea secured a share of the spoils when Fabregas converted a penalty in the 89th minute after Michail Antonio was deemed to have brought down Ruben Loftus-Cheek in the area.

Norwich City moved out of the relegation zone as they beat West Bromwich Albion 1-0 for their first victory since Jan. 2.

The Canaries, who had taken just two points from their 10 games since beating Southampton, scored their first goal away from Carrow Road since Jan. 13.

After a quiet first half, Norwich broke the deadlock on 50 minutes when Matt Jarvis set up Robbie Brady to slot home.

Norwich move three points clear of the drop zone but have played two games more than relegation rivals Sunderland and Newcastle, who meet at St James’ Park on Sunday.

Stoke City got back to winning ways with 2-1 win away to Watford .

Marko Arnautovic saw a goal correctly ruled out for offside before the break, but they extended their lead on 51 minutes when Walters set up Joselu to loft the ball over Watford keeper Heurelho Gomes.

Watford pulled one back through Troy Deeney on 86 minutes but they could not force an equaliser as Stoke secure a victory that keeps them in contention for Europa League qualification.