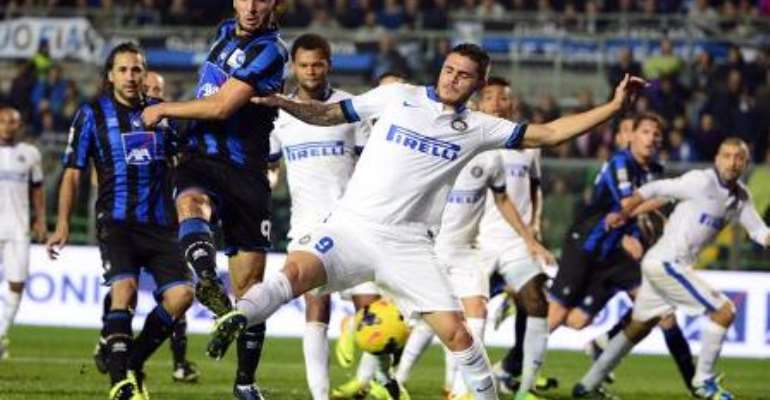 Rome, Jan. 4, (GNA/dpa) - Serie A leaders Inter Milan are back in action Wednesday at in-form Empoli after closing 2015 with a home defeat to Lazio.

The Nerazzurri lost 2-1 to the Rome side on December 20, staying on 36 points from 17 games to go into a two-week break one point clear of Fiorentina and Napoli.

As the squad trained for part of the break in Qatar's capital Doha, coach Roberto Mancini maintained his low profile saying that "our aim is to get back into the Champions League.

"It's exciting at the moment with five teams bunched together by four points. We're up there for now and if we can stay there until the last three or four games then we'll be able to talk about the title.

"There's still a long way to go and we need to knuckle down and focus on the first game back after the break.

"All the lads have given their all so far and if we're up where we are it's thanks to the entire squad. It's an honour for me to be at Inter and hopefully we can have a really good 2016 because Inter can't not be playing in the Champions League."

The Tuscany underdogs Empoli, meanwhile, are buoyant after closing the year on a run of four straight wins to sit eighth.

Fiorentina, the other Tuscan side, are away to lowly Palermo, while Napoli welcome Torino to close the 18th round in a late game.

Champions Juventus are fourth having forgotten their poor start to the season and seek an eighth consecutive win as they host bottom side Verona.

"It was a difficult start for the team and also for me because I was new here," German midfielder Sami Khedira said. "Then I got injured, which kept me out for two months.

"Results were not going well in Serie A. We are now in a much stronger situation than in the summer.

"The most important thing now is that the team keeps pushing on to win more matches. As we have seen in recent games in the league, we are all playing with more confidence, we're set up better tactically, we score more goals and concede less."

The mood is not as bright at fifth-placed Roma, who won their last outing against Genoa after only getting three points from four games.