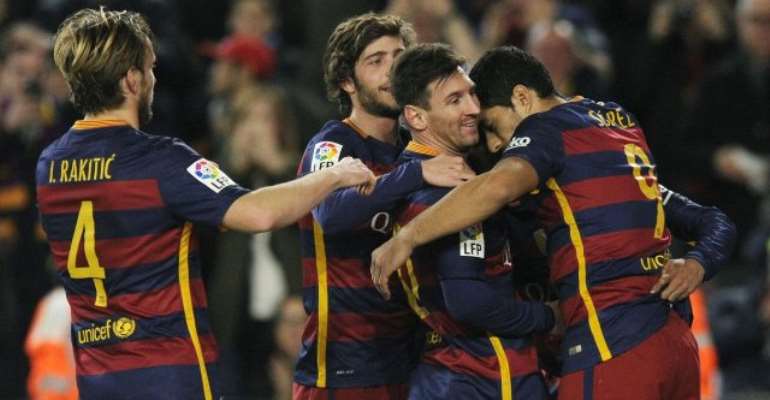 Barcelona joined Atletico Madrid atop the La Liga table with a comfortable 4-0 defeat of Real Betis at the Camp Nou on Wednesday night.

A Luis Suarez double, a Lionel Messi strike and a Heiko Westermann own goal rounded out the scoring for the recently-crowned FIFA Club World Cup champs.

Barcelona opened the scoring in strange fashion in the 29th minute. Messi was awarded a penalty after colliding with Betis goalkeeper Antonio Adan in the box, but the Betis man had cleanly punched away a dangerous Ivan Rakitic cross before taking out the Argentine in the follow-through.

Neymar's subsequent shot from the spot hit the bar and bounced back into play, only to see Westermann's attempted clearance unfortunately find its way into Adan's net.

Barca's second was more conventional. Messi and Neymar expertly exchanged passes in the 33rd minute before the Brazilian teed up his teammate for a tap-in from close range.

Suarez then got in on the act early in the second half, adding Barca's third seconds into the period with a cool, left-footed finish inside Adan's near post. The Uruguayan collected his brace seven minutes from time, collecting a Neymar back-heel and again slamming home inside the nearest post.

The win gives Barcelona 38 points from 16 matches, ahead of Atletico on goal difference with a game in hand.

Cristiano Ronaldo helped ease the pressure on boss Rafa Benitez as his two goals inspired Real Madrid to a 3-1 win over Real Sociedad.

The Portuguese missed a penalty and then scored from the spot to give Madrid a deserved first-half lead which was quickly cancelled out at the start of the second period by Bruma.

But Ronaldo volleyed home from a corner to restore Madrid's lead and then substitute Lucas Vazquez sealed the points with a close-range finish.

Madrid went into the game having scored 22 goals in their last three games, thrashing Getafe 4-1, Malmo 8-0 and Rayo Vallecano 10-2.

Rayo looked to have secured a hard-earned point until two minutes from time, when Correa latched on to a Thomas Partey pass in the middle of the box and fired hard into Yoel Rodríguez's top-right corner.

Griezmann raced onto a Jackson Martinez through pass before beating Rodriguez with a sumptuous left-footed chip.

Sevilla continue on their prolific run of form at home after downing Espanyol 2-0 at the Sanchez Pizjuan.

Ciro Immobile slid in to meet a cross from Vitolo to open the scoring after 16 minutes and then Ever Banega added a second shortly before the break to put Unai Emery's men on their way to a seventh consecutive league win.

A late goal by Duda saw Malaga beat Levante 1-0 away from home to pick up a third straight league victory.

The Portuguese veteran arrowed a free-kick under the Levante wall on 79 minutes to snatch the three points from an open game, leaving Levante rooted to the bottom of the table.

Malaga meanwhile climbed up to 11th spot and are unbeaten in their last five outings.

Keko and Borja each scored as Eibar beat Sporting Gijon 2-0 at the Estadio Municipal de Ipurua.