Ghana U20 star Clifford Aboagye: We can take the next step 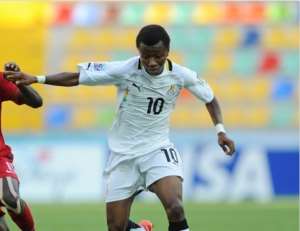 At the FIFA U-20 World Cup in Turkey two years ago, Clifford Aboagye was one of the stand-out players. The midfielder was named the winner of the adidas Bronze Ball award as he helped Ghana to a third-place finish.

The 20-year-old, who will be appearing at his second global tournament later this year, shared his expectations for New Zealand 2015 with FIFA.com, saying confidently: “We have the quality to go all the way.”

The Black Satellites started slowly at the last finals, losing their opening two games to France and Spain before beating USA and scraping through to the round of the last 16 as one of the best third-placed team. In the knock-out stage the west Africans found their form and wins against the two-time champions Portugal and Chile saw them in the semi-finals. Although they were beaten by France, their campaign ended on a high as they trounced Iraq for third. Aboagye says they have learned from the deep run in Turkey. “We understand that the first target will be to get out of the group, and then we’ll take it one after the other all the way.”

The diminutive midfielder is keen not only to see the team do better than last time around, but he is clear about his individual goals as well. “It has been two years since I won the bronze ball, and I have learned so much during that period. What I desire is for the team to do well and for me to win gold or at least silver in the category of the best player. It is a very big stage and every player dreams of playing in tournaments like this. It is not every day that you get to play at such a level and if given the chance, you grab it and hope to go a step further.”

Aboagye, who qualified for New Zealand with the Black Satellites after the team finished third at the CAF U-20 Championship in March, is confident that the African sides will impress Down Under. “The level of play at the AYC was inspiring. The African game is growing. It is always a great feeling to see other teams you know, from the same continent and with players you have engaged with before, do well.

“I will be happy to see them progress in New Zealand. It would be a shame if this did not happen, because they have so many talented players. I believe they have what it takes to do well, and I am hoping they live up to my expectations for them.”

Life changing at the last U-20s
Aboagye started his professional career with Accra-based club Inter Allies, but signed a contract with Italian Serie A side Udinese before the U-20 World Cup in Turkey. “Playing at the World Cup changed my life a whole lot. I had already signed for Udinese, but I got the whole world watching and Granada came calling afterwards. People were talking about me during the tournament. My game also got better, because I learned throughout the tournament from our opponents, from my team-mates and from other players.”

After the U-20 World Cup, Aboagye settled in at Spanish La Liga club Granada, starting out in the reserve side that features in the third tier of Spanish football. He debuted in the senior side in a Copa del Rey match earlier this year against Sevilla. “I thank God I got the chance to play the first game. It was a good day for me and I wish there will be more of such days and better.”

Disappointingly, it was to remain his only senior appearance to date, although he has been a regular in the reserve side. “It is the dream of every player to get more playing time at every level for club or country. I hope the same, and I wish I was playing a lot more. But most of the other players are older than me and I have hope that my time is coming soon. I just have to keep working and improve so that I will be ready when that moment comes.” And who knows: maybe another star-making performance at the U-20 World Cup will boost his career yet again.