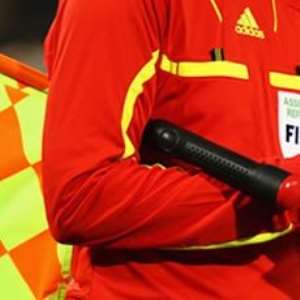 The Ghana Football Association (GFA) Prosecutor has charged Referee Emmanuel Dally-Gagba in respect of the First Capital Plus Premier League match between Asante Kotoko and Hearts of Oak at the Baba Yara Sports Stadium on 7th February, 2015. The referee who was in control of the match, is said to have failed to discharge his duties to ensure that the Regulations of the GFA were followed and for the match to kick-off exactly at the stipulated time.  His actions is said to have breached Articles 23(1)(a), 23(1)( (1b) and 37(7)(d)of the GFA General Regulations in respect of the Matchday 7 game.  Referee Dally-Gagba is therefore to submit his written Statement of Defence to the charge(s) on or before Tuesday, February 17, 2015 on or before 5pm at the GFA Secretariat failure which the Disciplinary Committee shall proceed to adjudicate the case without his Statement of Defence.