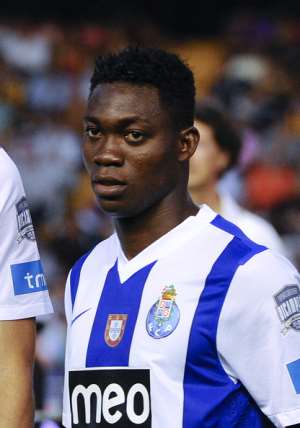 Kwesi Appiah also marked his first competitive start for the Black Stars with a goal as Ghana sealed a dream semifinal with competition hosts Equatorial Guinea on Thursday.

The game in Malabo kicked off with the Black Stars attacking right from the off and the team's efforts were rewarded as early as the seventh minute.

Appiah laid on a pass to Andre Ayew, who showed great vision to backheel the ball across the six yard box. Atsu arrived and easily beat Guinea goalkeeper Naby Yattara with a cool finish.

With Afriyie Acquah and Mubarak Wakaso in imperious form in midfield, the Black Stars managed to contain the Guinean threat, whilst a great battle emerged between Guinea captain Ibrahima Traore and Baba Rahman.

Just before half time, a scuffed clearance by a Guinean defender saw Appiah clean through on goal and he put the ball past Yattara for the second goal.

The second half played out like the first and if Ghana was to score a third goal, nobody was quite prepared for what the goal would look like.

Right after the hour mark, Atsu picked the ball on the bye line, cut inside and, spotting Yattara off his line, curled an absolute beauty into the top left corner.

Surely, it is a contender for goal of the tournament.

Ghana then controlled the game until the end and Yattara was sent off in the dying minutes for kicking Asamoah Gyan in the abdomen.

It was a truly professional performance for the Black Stars, which has qualified for its fifth straight semifinal since 2008.