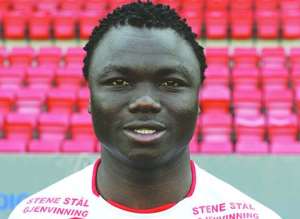 The 25-year-old reportedly underwent medicals with Belgian Pro League side Lierse SK but the deal could not materialise.

As a result, the former AC Milan signing has agreed to move to Thailand to sign for  Ratchasima who got promoted to the Thai top-flight side this season.

Adiyiah left Kazakhstan Premier League side Atyrau after the end of the season and was seeking for a new move to mainland Europe but he first failed trials at Swedish side Halmstad BK before the proposed move to Lierse hit the snag.

Nakhon Ratchasima gained promotion to the Thai Premier League this season and believe Adiyiah can guide them to success on their return to the top-flight.