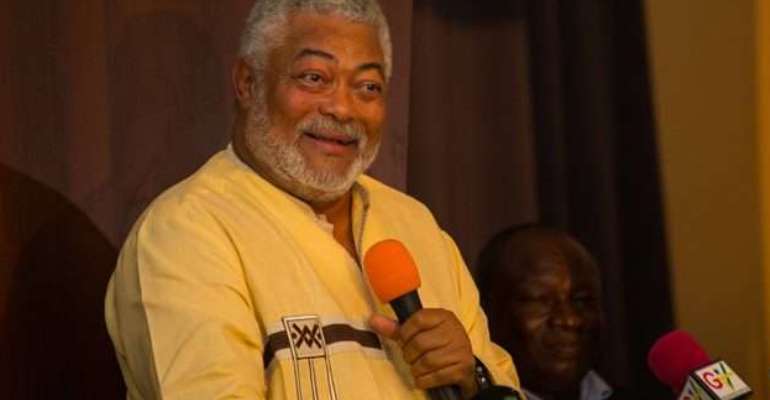 Former President, Jerry Rawlings and business magnate, Sir Sam Jonah were not to be beaten to affluence and show of wealth when it came to buying the auctioned book dovetailing the life and achievements of the legendary Azumah Nelson.

Azumah Nelson The Professor, 12 Rounds of Boxing and Life, the biography of the former 3-time world champion was launched at a glittering and well attended ceremony at Alisa Hotel in the heart of the Ghana capital on Wednesday night.

President Rawlings who was right there at the beginning of Azumah's career when he led his recruitment and development in the Airforce boxing team, was again present to personally launch the book which was authored by Ashley Morrison.

Along with Rawlings, the creme de la creme of Ghanaian business, industry, politics, religion and sports were all in attendance to support the highly revered former prize fighter.

It took sometime before the first copy was bought but it appeared to be a dilemma between Mr. Rawlings and Sir Jonah who kept pointing at each other to go ahead and be the first to issue the huge cheque.

Eventually, both men succumbed to the lure of Foh-Amoaning by jointly agreeing to buy the first two copies at the staggering amount each.

Deputy Sports Minister, Vincent Oppong Asamoah who represented President Mahama and the Presidency at the event, soon followed by also forking out the same GH¢100,000 for a copy on behalf of Vice President, Kwesi Amissah-Arthur.

As well, the first 12 copies of the book were also auctioned by Mr. Foh-Amoaning which were all bought at various prices ranging between GH¢10,000 and GH¢100,000 by among them Kennedy Agyepong famously nicknamed Kenpong AKA Capuccino, Pastor Mensah Otabil, TT Brothers.

A number of individuals and companies also filled pledge forms promising to buy the book at various amounts.

As well, six paintings of the life and career of Azumah Nelson were also auctioned for sale at various prizes ranging from GH¢6,000 (six thousand Ghana Cedis) and below.

Part of the proceeds from the book launch will go into the first phase of the Azumah Nelson Foundation Complex, a multi-purpose sports academy to be established at Akuse.

Already the Foundation with support from US-based organization Building Bridges Foundation is also constructing a 6-unit classroom block for an adopted school in Anum Apapam in the Eastern region.

After last night's launch, the book will be sold at Zenith Bank branches across the country.