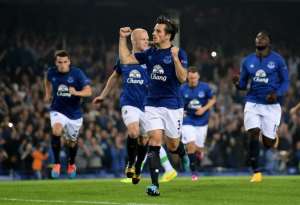 The left-back laid on two of the Merseyside club's three goals in their 3-0 Premier League victory over Aston Villa at Goodison Park on Saturday and now has five assists in the top flight this season.

Baines started two of England's three World Cup matches in Brazil and Everton manager Martinez believes the 29-year-old has kicked on since featuring on the biggest stage of all.

"It is extraordinary," said the Spaniard. "I think since he came back from the World Cup, I believe he's taken his game to the next level.

"The technical ability and the know-how and decision-making is a joy to watch."

Record signing Romelu Lukaku was on target in the victory over Villa and Martinez said there is more to come from the Belgium striker.

"Goals are always important for strikers," Martinez said. "That's his third goal in the league and that's a good number at this stage. But more than anything, I thought it was a really powerful performance from Rom.

"But I thought with the intent he had - he looked powerful, he looked very strong - he was a dangerous focal point for us and that's really pleasing.

"The goal is a consequence of his good work."