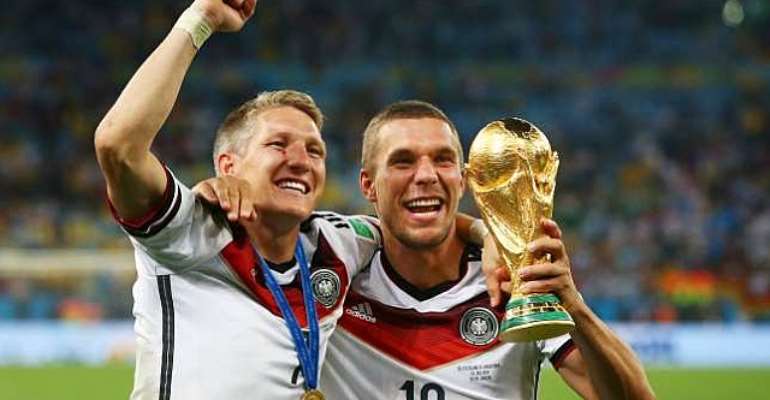 A glorious extra-time volley from substitute Mario Gotze proved decisive on Sunday as Joachim Low's side secured a 1-0 victory at the Maracana in Rio.

Germany's best-selling newspaper, Bild, carried a picture of the match-winner on their front page, together with the simple headline "Weltmeister", meaning world champion.

Die Zeit hailed the nation's "most significant title since 1954", suggesting Low now deserves to be mentioned in the same breath as Sepp Herberger, the first coach to lead Germany to World Cup glory.

In a comment piece, Oliver Fritsch explained: "He has renewed German football with patience and strategy, he has given it wings and brought admirers around the world."

While Gotze stole much of the limelight, with 'Super Mario' a predictably prominent headline in the British press, Die Welt paid tribute to midfield lynchpin Bastian Schweinsteiger.

The Bayern Munich midfielder battled on after suffering a nasty facial injury in an aerial challenge with Sergio Aguero.

Die Welt's Lars Wallrodt described Schweinsteiger's bleeding wound as "a symbol for his irrepressible will".

"The dream was foiled in overtime" read a headline in Clarin, while Ole offered sympathy, suggesting the team "deserve the best reception" for their valiant efforts.

Spanish dailies AS and Marca each made references to Gotze following in the footsteps of Andres Iniesta, scorer of the extra-time goal that secured World Cup success for Spain in South Africa four years earlier.

And in Italy, Gazzetta dello Sport labelled Germany's victory as a "triumph of maturity".

O Globo, meanwhile, reflected on Germany becoming the first European country to win the tournament in the Americas.