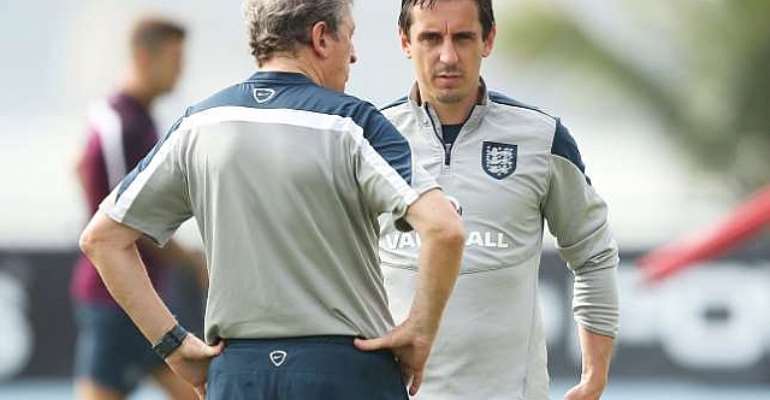 England's group-stage exit from the FIFA World Cup has sparked much debate over the state of the national team, with Hodgson receiving much criticism for their poor results in Brazil.

Speculation over Hodgson's future has already been dismissed by the Football Association chairman Greg Dyke, who insisted last Thursday that the 66-year-old would remain in charge until at least 2016.

Dyke's comments have not stopped the discussion over Hodgson's potential replacements, and the name of Neville, who works as an assistant to Hodgson in addition to his television commitments, has been thrown into the fray.

Former England striker Michael Owen, scorer of 40 goals in 89 appearances for his country, has tipped the ex-Manchester United defender to succeed Hodgson.

And Hodgson has every confidence Neville could be a future England manager.

"Of course he can be," Hodgson said.
"But it would be wrong to start putting him under pressure to suggest 'you need to get down to some work in a club side because the England manager's job is there waiting for you'. Who knows? When the job comes up again, who knows what candidates there will be.

"Having a long career in football gets harder and harder.

"The number of jobs available vis-a-vis the amount of time people spend in those jobs gets less and less, so I certainly wouldn't advise him necessarily to jump at the first opportunity to do coaching or management.

"The longer he can combine the two roles (coaching and punditry) the better.

"But I don't have any doubt in my mind that he will become a top-class football coach and top-class manager."

What's So Special About NAM1 That Akufo-Addo Is Shielding Hi...
31 minutes ago