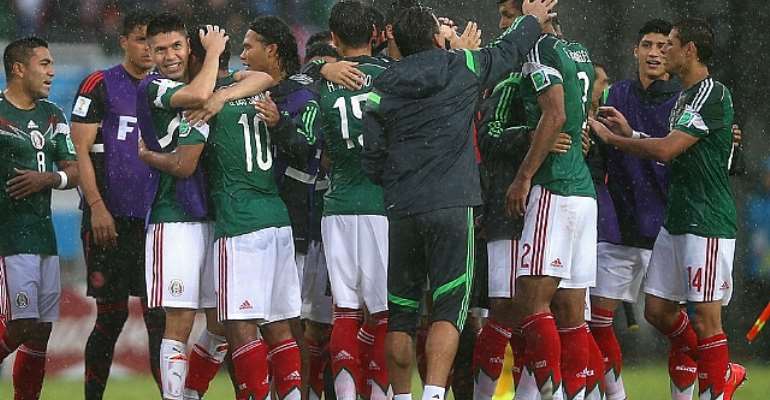 African giants Cameroon on Friday lost 1-0 to North American side Mexico in their opening Group A encounter in the FIFA World Cup at the Estádio das Dunas. A 62nd minute goal by Oribe Peralta was all Mexico needed to secure all three points at stake.

It was a massive turnout at the 42,000 capacity Estádio das Dunas in Natal as Cameroon began Africa's campaign at the 2014 FIFA World Cup in Brazil. The fans were absolutely delighted and expectant in the second game of this year's finals. Africa was on tenterhooks as they patiently waited for their first representative to open the show on a bright note. It was pouring heavily in the colorful and energetic atmosphere. The two teams had been tagged by pundits as the underdogs in Group A. The stage was set for an uncompromising roar between the African country and a North American country. Victory for either side would be critical.

The Cameroonians led by inspiring skipper Samuel Eto'o, who was making his fourth World Cup appearance, were eager to secure their first win at the World Cup since 2002. Mexico going into this game had never beaten an African side and was eager to break that jinx.

It was early days yet as the Africans built up slowly. But it was Mexico who looked a little bit sharper up front. In the 3rd minute Paul Aguilar's cross went straight into the side netting after some excellent touches from El Tri . Mexico still threatened to take an early lead as they pinned the Cameroonians to their own half in the first 5 minutes of the game. Mexico in the first 7 minutes meant business as they showed more attacking intent than the Cameroonians. The Indomitable Lions struggled to keep position at early in the game. The Mexicans still kept on finding holes in the Cameroonian defense. In the 8th minute, Hector Herrera had his shot go over the bar. A dominant 10 minutes by the Mexicans as they had created more opportunities.

In the 11th minute, a highly contestable decision by the assistant referee sparked a lot of debate, as he disallowed a Dos Santos goal, which seemed to be a clear goal, flagging the attacker offside. Cameroon thanked their stars for the poor decision by referee Wilmar Roldan. Cameroon had been reduced to their defensive shelf as the Mexicans kept on dominating the game. In the 15th minute Maxim Choupo-Moting had his goal disallowed after Eto'o was also caught offside, resulting from Cameroon's first corner kick.

Samuel Eto'o showed his instinct when he popped up to get a touch to beat Mexican goalkeeper Guillermo Ochoa on the 20th minute mark, but a timely intervention by Mexican defender Francisco Rodriguez saw the ball go out to corner. Mexico kept themselves going as they exhibited some great football with some sweet touches. Samuel Eto'o could have shot Cameroon in front after blasting the ball wide following an excellent work from left-back Benoit Assou-Ekotto, who beat his two markers down the left. Cameroon showed encouraging signs in attack as they once again very came close to scoring in the 23rd minute. The Africans were beginning to show signs of earnestness in their game. After 25 minutes of action, Mexico predictably had enjoyed 60% of possession with 40% going to Cameroon.

Cameroon were very fortunate in the 26th minute, after a perfect cross from Dos Santos saw Rafael Márquez failing to get his head on to what seemed as a free header on goal. Once again questions were raised about the Cameroonian defense as they had been porous throughout the first 30 minutes. Another frustrating moment for Mexico occurred as they had a second goal denied in the 31st minute.

Twice Dos Santos had been denied a goal by the assistant referee. Mexico coach Miguel Herrera was left in amusement on the touchline. Another debatable decision by the assistant referee! It was very unlucky on the part of the Mexicans, who had looked good and dominated the game. Herrera had no option than to complain to the fourth official on the touchline. Cameroon still showed naiveté in the game as they looked sluggish in building attacks. It was all Mexico in the first 45 minutes.

Although the rains kept on pouring, it never affected the excitement in the game. Cameroonian midfielder Stéphane Mbia could have received the first booking of the game after engaging in an unnecessary challenge on Mexican midfielder José Juan Vázquez. Cameroon once again had their defense breached after Andrés Guardado laid a nice through pass to Oribe Peralta, but Cameroonian goalkeeper Charles Itandje was quick to react in the 41st minute. Mexico still played the ball around delightfully and in the 43rd minute, Peralta capitalized on a chance to shoot at goal. Mexico's Peralta once again had his diving header go wide, following a cross from Paul Aguilar, but the striker had already been flagged offside.

After the first 45 minutes there was nothing to be said on the score sheet as the game still remained barren, but it was Mexico who had been more enterprising and has created more opportunities up front. Finally, referee Wilmar Roldan blew his whistle to bring the first half to an end.

The temperature was still soaring as they rain dropped unabatedly in the second half. Cameroon's German coach Volker Finke made his first substitution just at the beginning of the second half, bringing on Dany Nounkeu for Aurelian Chedjou. In the 47th minute, Mexico had an opportunity to raise their tails up as a perfect through pass from Guardado saw Peralta shooting the ball at goal, only for goalkeeper Charles Itandje to make a bold move to come off his line and get his legs to the ball to prevent the Mexicans from going in front.

The anxiety in the game had reduced as both teams remained cautious in the second half. In the 55th minute, Vázquez's one-time touch into the penalty area of Cameroon was never going to trouble Itandje in post.

Hector Moreno was booked in the 56th minute after bringing down Mbia on the edge of the box. A perfect free kick from Assou-Ekotto took a vicious deflection as they ball went wide to corner, an ambitious attempt by the Cameroonian left-back. Cameroon were gradually warming themselves into the game.

Mexico had their efforts rewarded when they shot themselves in the lead after Peralta capitalized on a rebound to slot the ball at the back of the net following an earlier effort by Giovani Dos Santos in the 61st minute.

Cameroon showed some urgency after conceding the goal. Mexico's head coach Herrera brought on Marco Fabian for Andrés Guardado in the 69th minute. In the 71st minute, a fast break by Cameroon saw Benjamin Moukandjo's cross reaching Samuel Eto'o but his effort went out to touch. The Mexicans still looked untroubled.

In the 74th minute, goal scorer Peralta was taken off for Javier Chicharito Hernández. The 26-year-old forward had completed his job for the day as he received applause from the fans. In the 76th minute, Dany Nounkeu received a booking after needlessly bringing down Fabian on the left-hand side of the box.

Cameroon however took off midfielder Alex Song for striker Pierre Achille Webó in the 78th minute in order to be efficient up front. Samuel Eto'o had his ambitious effort go wide in the 79th minute. A corner kick from Assou-Ekotto eluded everyone as Cameroon failed to get a head on the ball.

Mexico still threatened in front of goal when Chicharito sent in a low-cutting cross to Fabian in the 80th minute, only for Cameroonian substitute defender Dany Nounkeu to intervene. Mexico still kept their position as they made sure they protected their 1-0 lead. With 6 minutes to go, Choupo-Moting's shot went straight into the arms of defender Hector Moreno in the box; a clear penalty situation but the referee did not have any of that.

Cameroon missed a glorious opportunity in the 86th minute, when Moukandjo sent in a cross from the right-hand side of attack, only for Rodriguez to clear the ball out of the danger zone, with Cameroon Coach Volker Finke watching on in astonishment.

Time was running out for the Africans as they moved forward in search of the equalizer. A fantastic save from Mexican goalkeeper Guillermo Ochoa in the 90th minute saw Mexico maintain their lead, following a Moukandjo's header. Javier Henandez could have done better in the 91st minute, when he had his touch go over the bar after a perfect cross from Fabian. Cameroon moved forward as Mexico kept their lead so teasingly.

After 90 plus 4 minutes of additional time, La Verde broke the jinx of not securing a win over an African country as they took away all three points. A disappointing moment for Volker Finke and his men, following their 1-0 loss in the opening game of the tournament.