2014 World Cup: Ex-Ghana youth star Issaka hits out at Ghana vice captain Essien for turning his back to the pitch during Holland friendly 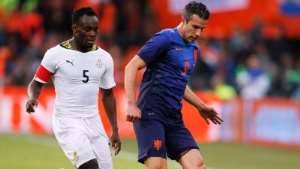 The AC Milan star has come under public condemnation for turning his back to the game while the action was still on at the Stadion Feijenoord.

And, Issaka who earned his named during the mid-90s for his artistry and patriotism has expressed worry at Essien's attitude and also rebuked other players on the bench for their attitude on the night.

“This is the World Cup and not any mere tournament so if you have players turning their back to the game while it's still on it doesn't show enough commitment and professionalism,” he told Accra-based Asempa FM.

“You also have others proving stubborn when asked to go replace an injured player. I think we should be more serious and professional and show seriousness,” he added.

Essien, who captained the Ghana side on the night, was replaced at recess by Parma midfielder Afriyie Acquah and cameras captured him with his back shown to the playing pitch while friend Muntari looks on with an apparent lack of interest in the game.