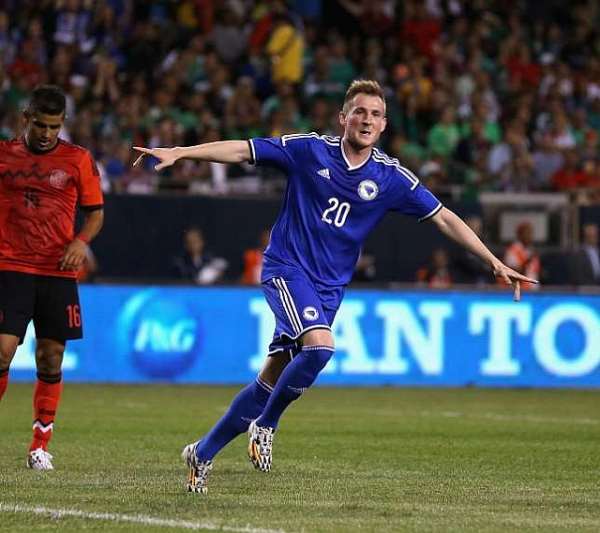 Izet Hajrovic opened the scoring for the Bosnians on 41 minutes at Soldier Field, and it would be enough for the Balkan nation to secure their first win over Mexico in their three encounters.

Edin Dzeko, who scored a brace in their 2-1 win over Ivory Coast on Saturday, was leading the line once more for Safet Susic's men, with left-back Sead Kolasinac, left winger Edin Visca and defender Ognjen Vranjes missing from the XI that started against the Ivorians.

In for Bosnia came Senad Lulic, Mensur Mujdza and Sejad Salihovic - the latter already playing 71 minutes against Ivory Coast after Kolasinac was withdrawn due to a knee injury.

Muhamed Besic was handed just his second senior start in the Bosnian side, and the 21-year-old duly impressed as he firmed to feature in their Group F campaign in Brazil against Argentina, Iran and Nigeria.

Miguel Herrera's Mexico will now have to regroup as they continue their preparations for a Group A assignment against hosts Brazil, Cameroon and Croatia.

Herrera swung eight changes to his starting XI from the side who beat Ecuador 3-1 on Sunday, with captain Hector Moreno, Carlos Pena and Hector Herrera the only survivors.

Despite the changes, coach Herrera persisted with five men at the back, and as they sat deep, Bosnia maximised their time on the ball early and created several chances, none better than the one that fell to Dzeko.

Mexico failed to adequately clear a corner - and the Manchester City man lashed a shot from close range over the crossbar in the seventh minute.

Javier Hernandez came closest to scoring for Mexico, when he hit the left upright on 24 minutes after controlling a long ball, taking a touch and firing into the woodwork.

Bosnia were continually frustrated by Mexico's deep lying defence, but they got the breakthrough they deserved on 41 minutes.

Salihovic got in behind the Mexican defence, and cut back a ball from the left byline which found Hajrovic, who smashed home the opener with a left-footed strike.

Allaying the fears of Bosnia fans, Kolasinac came on just after the half-time interval for Toni Sunjic.

Roma man Miralem Pjanic had the first on-target shot of the half, but his 48th-minute header failed to trouble Mexico custodian Alfredo Talavera.

Hector Herrera and Hernandez linked up well just prior to the hour-mark, but the former's shot from the edge of the area did not bother Bosnia goalkeeper Asmir Begovic, who watched the effort sail high and wide.

The difference between the two sides was typified by a period of play in which multiple Mexico corners failed to threaten, before Bosnia's 65th-minute corner saw Dzeko power a header just wide of the far post.

Begovic was forced into two fingertip saves late on - one from an Andres Guardado free-kick in the 85th minute, before Miguel Angel Ponce's injury-time effort required intervention from the Stoke City man, who was at full stretch and tipped the strike onto the post.