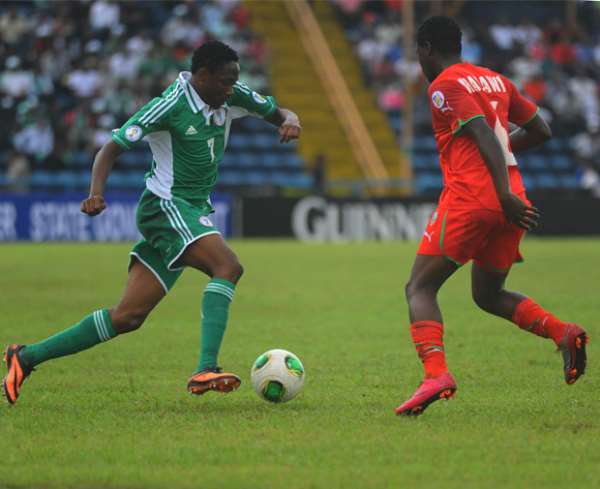 Nigeria on Saturday advanced to the final qualifying rounds for the 2014 World Cup after they beat Malawi 2-0 in Calabar.

The Super Eagles finished top of Group F with 12 points from six matches, while Malawi finished on seven points.

Fenerbache striker Emmanuel Emenike shot Nigeria ahead in first half stoppage time, when he got to the end of a delightful long ball from Lazio midfielder Ogenyi Onazi to coolly chip past the diving Malawi goalkeeper Charles Swini.

Nigeria increased their advantage in the 51st minute when Victor Moses fired home from the penalty spot after goal-bound Oduamadi was upended inside the box.

Malawi were reduced to 10 men in the 53rd minute when Limbikani Mzava received his second booking for a late tackle on Ahmed Musa.

Nigeria created several other chances but goalkeeper Charles Swini was outstanding for Malawi as he denied Ahmed Musa twice and in the dying minutes of the encounter he again pulled off another great save off substitute Shola Ameobi.

Nigeria controlled the game from the kick-off with Victor Moses, Mikel Obi, Ahmed Musa and Emenike on the attack from the onset.

CSKA Moscow striker Musa could have given the home team the lead as early as the third minute, but he dragged his shot from inside the box well off target.

Onazi's two efforts from distance were also off target as Nigeria continued to pile on the pressure in search of the opening goal.

Malawi, on the other hand, were happy to soak in the pressure from the home team.

They kept their defensive shape and to their credit they were able to trouble the Nigerian defence on at least three occasions on the counter attack.