Mario Balotelli Doesn't Like Talking About His Real Ghanaian Parents 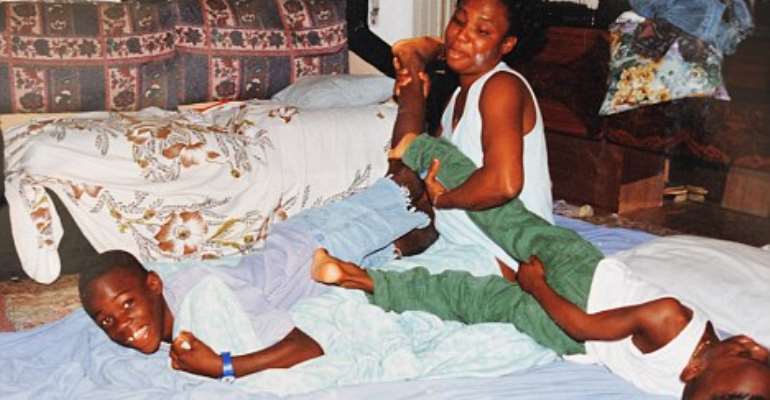 Young Balotelli playing with his biological mother and brother

AC Milan star Mario Balotelli has revealed he doesn't like talking about his real Ghanaian parents.

The 23-year-old was adopted by an Italian couple; Francesco and Silvia Balotelli after he was given up to a foster home as a boy.

The former Man City striker who was born to Ghanaian parents had a series of intestinal surgeries as he battled an illness while growing up.

He however recovered from this illness and took comfort in playing football on a small artificial field near his house where kids went seven-on-seven without knowing he was building his craft into becoming a world superstar.

Now playing for giants AC Milan and the Italian national team – the first black player to do so – the controversial figure prefers not commenting on the subject of his real parents even though he says he 'sometimes' connects with them.

“It is something I never talk about (referring to his biological parents),” he said in an extensive interview with Sports Illustrated.

“Brescia is my home. It's where I will live one day when I stop playing football. When I'm in Brescia, I'm relaxed.”

Balotelli only gained Italian citizenship at age 18 – a year after making his Serie-A debut for Inter Milan.

A much-debated Italian law prevented him from gaining automatic citizenship even though he was born in Italy.

Balotelli has labelled this law as 'stupid' and ought to be renounced.

“That's a stupid rule,” says Balotelli, who carried a Ghanaian passport at the time even though he has never set foot in Africa.

“I spent 18 years in Italy, and I was not Italian yet. That's why I hope all the guys that are like me and living this are going to be Italian before I became Italian.”