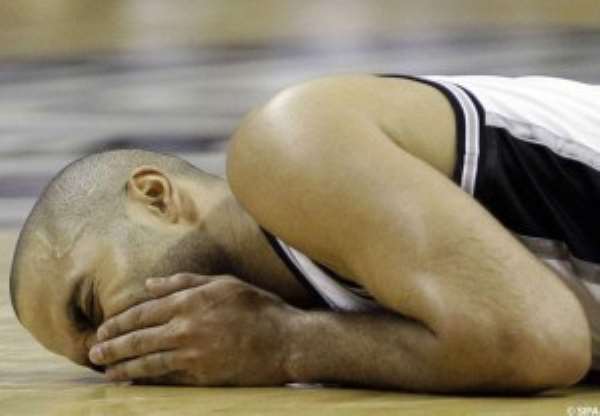 The Spurs got back on track but quickly turned their attention to point guard Tony Parker, their leading scorer and assist man who sprained his left ankle and is likely to miss several games.

DeJuan Blair paced eight players in double figures with 16 points and the Spurs racked up 41 assists in a 130-102 victory over the Sacramento Kings on Friday night. San Antonio got back to its winning ways, two nights after falling to Phoenix for its first home loss in 18 games.

Despite maintaining the league's best record with a methodical inside-outside game that kept the Kings on their heels, the focus after the game was the injury to Parker.

BOX SCORE : Spurs 130, Kings 102
“He'll be out a while; it's a good one,” Spurs coach Gregg Popovich said. “He's been a stalwart for us. He's having an All-Star season. As I've said, he's playing better than any other point guard in the league consistently through the year. We will miss him.”

Parker left with 13 points and seven assists. Danny Green had 15 and Kawhi Leonard and Tiago Splitter each had 14 points. Manu Ginobili set a team record with 15 assists off the bench.

Marcus Thornton led all scorers with 25 and Isaiah Thomas added 18 for the Kings.

KINGS : Group emerges to keep team in Sacramento
Parker, who closed out February averaging 26.1 points and 8.3 assists and shooting 54 percent from the field, drove straight down the lane for a scooping layup with 4:40 left in the third period. As he twisted his body in midair to shield off Thomas, who was defending on the play, Parker came down on his left ankle and rolled it outward.

He dropped to the ground grabbing the ankle while play continued at the other end of the court. He was eventually helped off the court, straight to the locker room and he did not return.

The Spurs have been accustomed to adjusting to injuries all season. Leonard missed 18 games with tendinitis in the knee; Stephen Jackson missed 14 games with a broken finger on his right hand and Ginobili has missed 12 games with a string of various injuries.

“Obviously a huge loss, he's been our leader all year long,” Spurs All-Star forward Tim Duncan said. “We've played with all different kinds of people throughout this year. We're going to rally. Pop is going to change some lineups.

“We're obviously not going to replace him. But we're going to have to change the way we play for a little while.”

Ginobili added that it would be a challenge because of how well Parker is playing.

“We'll have to play better,” Ginobili said. “We're going to have to move the ball really well, because what he creates off the dribble, nobody will be able do it.”

Whatever doubts the Spurs will have in the coming days were temporarily calmed with the ball movement they used to push the Kings into submission. San Antonio's 41 assists came on 51 baskets.

“Yeah, it just happened,” Ginobili said of his 15 assists. “In the first half, it started happening. And in the second half, we were just moving the ball really well. (Sacramento) played zone, they got a little lost and in a game were you're 20 or 30 (points ahead), it's easy to do that. I wasn't really forcing the issue.”

Popovich was relieved to see his team bounce back from a 105-101 overtime loss to Phoenix on Wednesday, in game that saw the Spurs fail to score a basket in the extra period against the team with the worst record in the Western Conference at the time.

“They did a great job in that respect,” Popovich said. “We were so poor in the last game. We were in the mud execution-wise and discipline-wise. It's good to get back on track so quickly. Now we'll make some more adjustments.”

Kings guard Tyreke Evans said the Kings failed to adjust to the movement.

“We let them push off and get a lot of backdoor cuts,” Evans said. “ That kind of hurt us because they got easy baskets.”

The Spurs turned the ball over 17 times and the Kings capitalized on the miscues early in the game. Sacramento scrapped its way back from an 18-point deficit with a 12-3 run in second quarter to pull within nine at 42-33, but 13 first-half turnovers plagued the Kings. San Antonio built the lead back up to 17 before Evans nailed a 53-foot shot at the buzzer and the Spurs held a 63-49 lead at the half.

The Spurs took advantage of five consecutive turnovers by the Kings midway through the opening period to pull out to the big early lead. Sacramento scored the last five points to close the gap to 34-21 at the end of the first period.

Notes: The Spurs were without injured Boris Diaw (low back strain), Jackson (sprained right ankle) and Gary Neal (left calf), who missed his third consecutive game . With Diaw out, Tiago Splitter is now the only Spurs player who has appeared in all 60 games for the Spurs this season . Sacramento coach Keith Smart played two games in a Spurs uniform during the 1988-89 season . With Friday's victory the Spurs have won all three meetings with the Kings this year with one remaining and claimed the regular-season series for the ninth consecutive season.