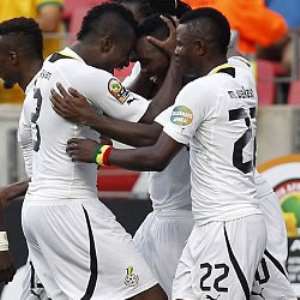 Black stars 2013 Port Elizabeth, Feb. 1, GNA- Ghana look favoured to tower their quarter final meeting with Cape Verde as both clash at the last eight stage at the Africa Cup of Nations to decide who see who books a place at the final four.

The game billed for the Nelson Mandela Bay Stadium commences the quarter final clashes at the competition which have seven teams from West Africa plus the host.

The Black Stars, tagged as favourites to win the tourney have bagged seven points out of a possible nine are expected to parade a squad capable of standing up to the challenge following injury boost to trio, Anthony Annan, Wakaso Mubarak and Richmond Boakye-Yiadom.

When both teams meet, though the focus will be on how good the Black Stars, expected to parade the likes of Emmanuel Agyemang Badu, Mohammed Rabiu and Kwadwo Asamoah in midfield is expected to give the physical Cape Verde side a run for their money.

While Ghana walk into the game with experience on their side, Cape Verde, a relatively inexperienced side travelled out of a group that included hosts, South Africa, Angola and Morocco had carved niche for themselves as a very discipline side.

Cape Verde has been very physical thus far and how Coach Kwesi Appiah's charges are able to contain their opponents who will obviously have nothing to lose will be key to the team's progress beyond this stage.

Cape Verde had made their intents known in many ways, often claiming their sights are firmly fixed on the trophy, and with Ghana's thirst to end the search for a fifth Nations Cup trophy that spans three decades, the stage is set for a very uncompromising encounter.

The winner of the game will meet the victor of the Togo and Burkina Faso duel fixed for Sunday, February 3.