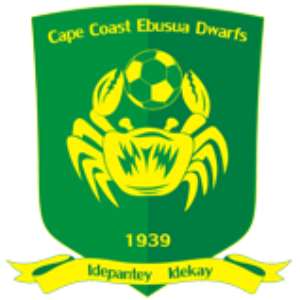 Accra, March 15, GNA – Chief Executive Officer (CEO) of Cape Coast Ebusua Dwarfs, Nana Aidoo has been summoned to appear before the Ethics Committee of the Ghana Football Association (GFA) following comments attributed to him in the media.

Nana Aidoo is scheduled to appear before the Committee on Tuesday, March 20, 2012.

A GFA statement copied to GNA Sports inviting the CEO said: “You are to assist the Committee in its investigation into an allegation that you support the physical assault by fans of Dwarfs on Referee Mr Patrick Kyeremarteng who handled your GLO Premier League match on Sunday, 11th March, 2012 against Aduana Stars at the Robert Mensah Stadium, Cape Coast.

“This statement is alleged to have been made on Peace FM Sports Programme on Monday, 12th and Wednesday 14th March, 2012,” The statement read.

The invitation of the Ebusua Dwarfs CEO is the latest in the GFA's bid to investigate the unsporting incident after the temporal closure of the Robert Mensah Stadium.

The match officials who handled the said match were assaulted by fans of the home team after the game, which led to them being hospitalized.

Visiting Aduana Stars won by a lone goal thanks to Godfred Saka's first half effort.