Agbeko is Champion again as he dethrones Yonnhy Perez 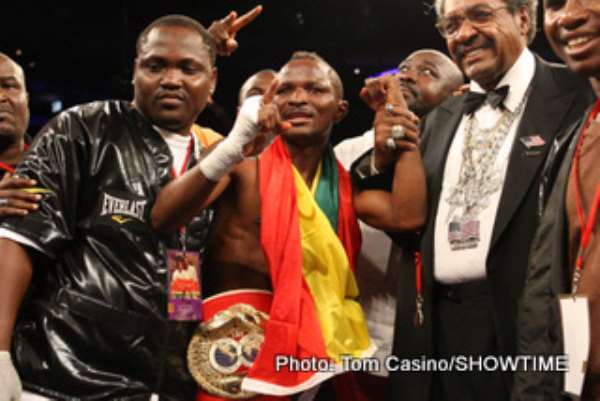 
Ghana's Joseph Agbeko out-boxed and dethroned Colombian-born IBF bantamweight (118 pounds) champion, Yonnhy Perez of Santa Fe Springs, Calif., to win back the crown that he lost to Perez in 2009.

Perez, who turns 32 in January, was making the second defense of his crown against Agbeko, having come off of May's disputed, majority draw with Mares, which set him up for Saturday night's return bout with Agbeko, the man he defeated, 116-111 on the card of Jerry Roth and 117-110 on those of Glenn Trowbridge and Barry Druxman, in October of last year.

Just three months earlier in July, Agbeko had earned a unanimous decision over Perez's promotional stablemate, Darchinyan, for the same IBF crown. A former holder of belts from the IBF flyweight (112 pounds), and, WBC, WBA and IBF super flyweight (115 pounds) organizations, Darchinyan and Mares traded knockdowns in their fight before Mares emerged victorious.

Agbeko-Perez was a rematch of fight during which Perez continually beat Agbeko to the punch with telling blows during toe-to-toe exchanges, even as Perez had benefited from a ruled 10th-round knockdown that was, in fact, set up by an accidental head-butt.